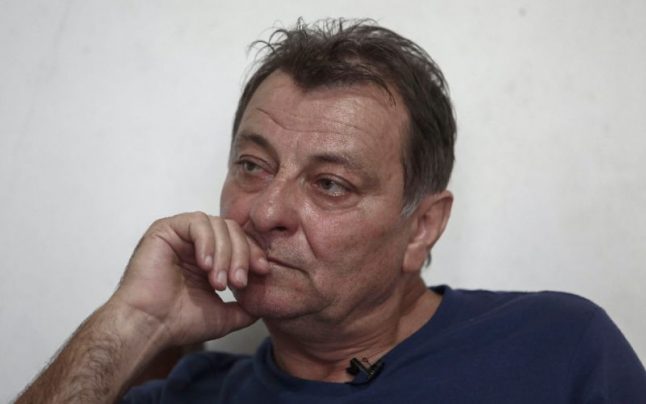 “I reaffirm my promise to extradite the terrorist Cesare Battisti, so loved by Brazil's left, immediately in case of election victory,” Bolsonaro said on his Twitter feed.

Italy has repeatedly sought the extradition of Battisti, 63, who has been living in Brazil for years under protection accorded him by former president Luiz Inacio Lula da Silva, now in prison for corruption.

Reached for comment by AFP, Battisti reacted calmly, saying Bolsonaro “has nothing to do with it because he's not the one who decides.”

“I'm not worried because it's not the executive who decides that right now. It's the judiciary,” he said, recalling that the Supreme Court must rule on his case.

Bolsonaro, a former paratrooper and veteran politician who polls say is likely to become Brazil's next president in an October 28 run-off election, is seeking to undo several decisions made during the presidencies of Lula and his successor Dilma Rousseff, who was impeached in 2016.

He has attacked Lula's Workers Party as corrupt and in bed with leftist regimes such as Venezuela's, and vowed law-and-order reforms that would include an end to impunity and short prison sentences.

Battisti escaped from Italian prison after being convicted in Italy in 1979 of being a member of the outlawed Armed Proletarians for Communism.

He was subsequently convicted in absentia of having killed two members of Italy's police forces, taking part in the murder of a butcher, and having helped plan the slaying of a jeweller who died in a shoot-out which left his 14-year-old son in a wheelchair.

He admits to having been part of an armed revolutionary group but denies responsibility for any deaths.

In 2004 he skipped bail in France, where he had taken refuge, and went to live in Brazil until he was arrested in 2007 in Rio de Janeiro.

Having published several critically acclaimed novels, he described himself in a 2011 interview as a reformed man.

After four years in custody, Lula issued a decree, later upheld by Brazil's Supreme Court, refusing Battisti’s extradition to Italy, and he was freed, angering Italy.

Battisti, who has a five-year-old Brazilian son, last year told AFP he faced “torture and death” if he were ever to be sent back to Italy.

He said there were numerous times when “I was threatened by police, by military, by politicians including the former minister (of defense) Ignazio La Russa from the government of Silvio Berlusconi.”