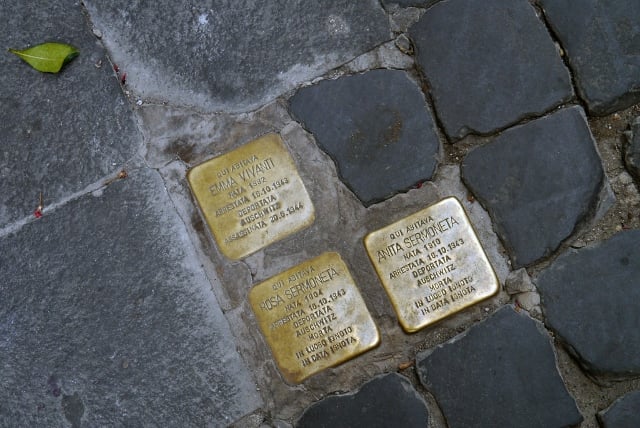 A memorial to former residents set in the cobblestones in Rome's former Jewish ghetto. File photo.

Today, Rome’s Portico d’Ottavia, a district of just four blocks wedged between the Tiber and the Palazzo Cenci, is a gentrified area packed with restaurants and thronged with visitors.

Here tour groups refuel after a long day of sightseeing, well-off Italians go out to celebrate, and multilingual waiters promise passers-by that their carciofi alla giudia are the best in town.

The area has been the heart of Rome’s Jewish community for half a millennium, and it has changed drastically in the past few decades.

But if you look carefully on the wall of the Library of Archeology and History of Art, across from the synagogue, you can find one of Rome’s most poignant memorial plaques.

It commemorates 'la spietata caccia agli ebrei', or the ‘ruthless hunting down of the Jews’, in the Nazi raid on the ghetto that took place here on October 16th, 1943.

Seventy-six years ago, when the world was at war, Portico d’Ottavia was a ghetto, a virtual prison for much of the city’s Jewish community. On that morning, SS commanders in Rome ordered that the ghetto’s residents be rounded up. On the morning of October 16th, 1943, trucks pulled up on the piazza beside the Portico d’Ottavia, the neighbourhood was sealed off, and 365 Gestapo entered the narrow streets and courtyards. People tried to hide at the back of their shops, and some quick-thinking residents were able to get away over the rooftops.

Two days later they were put on a sealed train from Tiburtina station and deported to the Auschwitz-Birkenau death camp. Only 16 were ever to return.

Despite the racial laws in place at the time, those living in the ghetto weren’t expecting violence and the raid took them by surprise.

Historical records say that on September 24th, 1943, the order came from Berlin to “transfer to Germany” and “liquidate” all the Jews “through an act of surprise”. The telegram was addressed to Lieutenant Colonel Herbert Kappler, commander of the SS in Rome.

On September 26th, Kappler had demanded that the Jewish community deliver 50 kilos of gold or face the deportation of 200 people, a demand which led the Roman Jews to believe all the Germans wanted was a ransom. With great difficulty, the gold was put together and delivered two days later to Via Tasso 145, the feared address at which the SS kept its offices, prison and torture chambers.

The Jewish community thought they were safe. But even as the gold was being delivered the SS, using the lists of names of Jews provided by the Office of Demography and Race of the Ministry of the Interior, was organising the raid.

Tonight there will be a torchlight procession, which takes place every year to remember the event. The procession gathers in Trastevere before walking across the Tiber to the former ghetto.