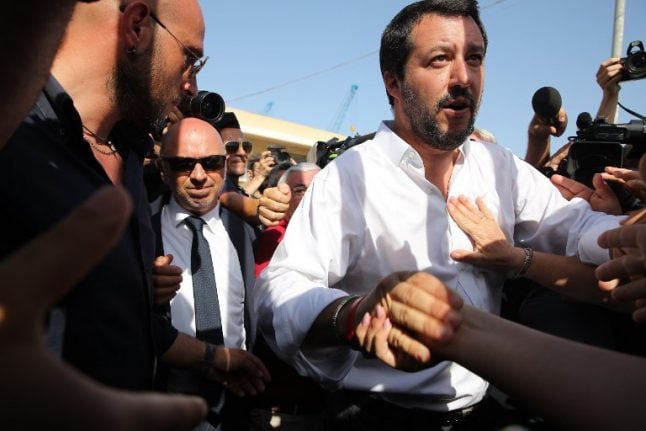 Matteo Salvini, head of the League, in Sicily earlier this year to rally support for his party's candidates in municipal elections. Photo: Carmelo Lenzo/AFP

Ismaele La Vardera took the Italian political scene by surprise when he ran for mayor in the city of Palermo last year.

The unlikely candidate, a 22-year-old local journalist, ran on an independent ticket but was soon courted by the right-wing League and Fratelli d’Italia parties.

His alliance with the League then came as another surprise for voters in Palermo.

But La Vardera said he too was surprised when he quickly found himself involved in “unspeakable agreements” and “dangerous deals” with shady figures promising him election success – for a price – on the island known for its powerful mafia.

“While I was on the campaign trail, I was amazed by certain things that were happening to me,” La Vardera said in an interview with The Guardian. “That’s when I decided it might be worth it to record everything.”

The resulting hidden camera footage, which League supporters have tried to block from being released, has been made into a documentary film called ‘Italian Politics for Dummies’ set to be released in November.

READ ALSO: Nearly 200 journalists in Italy are under police protection

One part of the film shows a meeting in the basement of an apartment building in the Kalsa neighbourhood of Palermo, known as a mafia stronghold. La Vardera was accompanied to the apartment by a former Palermo councillor to meet a relative of the imprisoned mafia boss Gino “U Mitra” Abbate, the Guardian reports.

The relative reportedly offered to “deliver 300 votes in this district…but they’ll cost you €30 each.”

The film also reportedly includes secretly-recorded footage from a two-hour meeting with Salvini in which his party’s support for La Vardera was formalised.

The journalist declined to reveal what else was said during the meeting before the release of the film next month.

A trailer for the documentary which is scheduled for release in November.

After the elections, when he admitted to recording his meetings on hidden camera, a furious public debate ensued around the ethics of what he had done. But a judge has since ruled in the journalist’s favour.

Alessandro Pagano, a coordinator in western Sicily for the League campaign group ‘Noi con Salvini’ (Us with Salvini), appealed to the court to prohibit the publication of audio and video recordings captured by La Vardera.

The judge however rejected accusations that La Vardera’s candidacy had been fake and that he had run with the sole intentions of making a film.

“He participated properly in the electoral campaign, also providing documented expenses. There is no evidence of fraudulent intentions,” the judge declared.