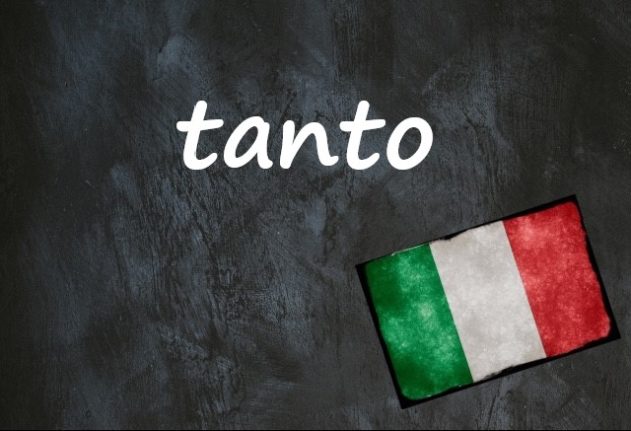 If you want to say there’s ‘loads of’ or ‘lots of’ of something in Italian, you can use today’s word: tanto. It also means both ‘many’ and ‘much’.

It’s a word you’ll need right from the start of your Italian language-learning journey, and it can be a little tricky to get the hang of.

But you don’t need advanced grammar knowledge to use it. It’s pretty straightforward to use tanto as an adjective, as long as you know that the form of the changes (tanto/a/i/e) depending on the noun (whether it’s masculine or feminine, and singular or plural).

See what we mean in the following examples:

We don’t have much time

There’s a lot of snow on the mountains

I spent a lot of money

There are a lot of apples on the tree

So what’s the difference between tanto and that other common Italian quantifier, molto?

Sometimes, nothing. These two words can in many cases be used interchangeably to express the fact that there’s simply a lot of something.

But, other times, tanto has a more emphatic feeling to it than molto, as you can see from the following example:

Maria has a lot of cats as opposed to Maria has loads of cats.

So there are situations where you might want to use tanto to stress your point:

I told you loads of times not to touch the scissors!

Tanto as an adverb

When used as an adverb, the ending stays in the masculine singular form.

Thank you, you were very kind

Today I worked a lot

And if you really want to stress your point, you’ll be pleased to know that you can add the suffix -issimo(/a/e/i) to tanto to create the superlative form.

You can use it on an adjective:

There were loads of people at the party

Or an adverb with a verb:

But as an adverb with an adjective it sadly doesn’t work.

Instead, here you could use another word that commonly gets confused with tanto, troppo; meaning ‘too much’ or ‘too many’, but also often used to stress that something is ‘really’ or ‘so’ good/bad/etc.

This cake is really good!

Note how, as troppo is used as an adverb (to modify the adjective buona), you don’t need to change the ending depending on the noun.

Who knew there were so many ways to say ‘many’?