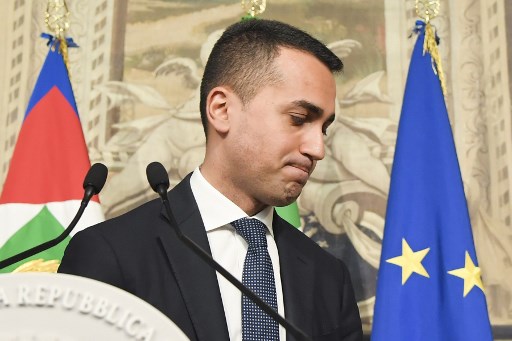 One month ago, the leader of the anti-establishment Five Star Movement (M5S) took to the balcony of the seat of government to cry victory over a budget drawn up with his unlikely coalition partner, the far-right League.

He toasted the win with a party for his team on a boat on Rome's Tevere, or Tiber, river.

Yet this weekend, furious M5S voters were burning the movement's flag over broken electoral promises.

Di Maio's difficulties are thrown into sharp relief by the success of his co-deputy prime minister, League head Matteo Salvini, a far more experienced politician with a savvy social media team and a fondness for whipping up racial intolerance.

Salvini, 45, is the uncontested head of a united party, while Di Maio, 32, is struggling to keep rebellious factions in line. Under the movement's rules, this is also the last term he can serve, rendering him a de facto lame-duck leader.

Five Star became Italy's largest party at the March elections, winning nearly 33 percent of the vote, while the League fell in as its junior coalition partner with 17 percent.

But the noise of champagne corks popping had barely died away when the League began gaining popularity, shooting into the lead while M5S flagged. The League now boasts 31 percent of voter intentions, while M5S has 27 percent, polls this week show. Salvini is the country's most popular politician, with 58 percent compared to Di Maio's 51 percent, according to Ipsos Italia.

Both leaders have fought with Brussels over the budget, but when Di Maio accused European Central Bank head Mario Draghi of attacking Italy, even the Fatto Quotidiano daily — which usually defends the movement — slammed his “infantilism and incompetence”.

“The movement made promises it really wants to keep. He's struggling,” he said.

Let-downs in the South

With his boyish grin looking increasingly strained, Di Maio has called for unity within his movement after a series of about-turns on pledges, particularly in the south, where the party won much of its support.

The M5S had vowed to close Ilva, one of Europe's most polluting steel plants, but Di Maio has kept it open.

Last week he rowed back on a pledge to halt an international gas transport project, saying it would cost too much to abandon the Trans Adriatic Pipeline (TAP) at this late stage.

All eyes are now on the controversial TAV high-speed rail link to connect Turin with Lyon in France. The movement has long opposed it, but the League is for.

Di Maio has denied the movement is in crisis, though analysts say the TAV U-turn could be a killer blow. The project is hated by many of his party's supporters in the south.

READ ALSO: What the election result tells us about Italy's north-south divide

“Di Maio keeps promises. Not his own, but those of (former premiers Silvio) Berlusconi and (Matteo) Renzi,” quipped political observer Mattia Feltri. The Neapolitan can boast one victory: while he has been obliged to back a tax amnesty demanded by the League, he managed to get Salvini to water it down by removing a clause regarding overseas funds.

His claim an “unidentified hand” had tried to tweak the deal behind his back had sparked ridicule on social media.

He urged Five Star on Monday to close ranks, just as Roman soldiers used to lock shields to keep out enemy arrows — though his appeal prompted more mockery after Twitter users spotted similarities between his rallying words and a Wikipedia entry.

The man who scares her, however, is “Salvini, because he knows what he wants. Di Maio is just always there, smiling”.