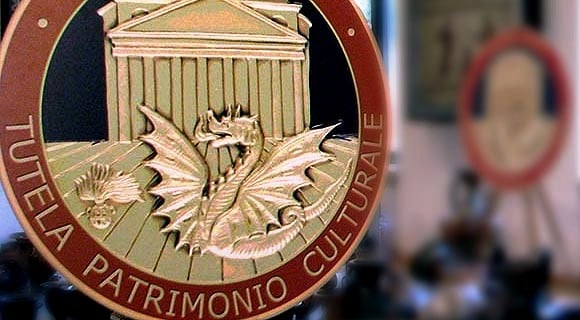 The clampdown on cultural crimes comes after several high-profile repatriations of Italian art and antiquities taken abroad and recovered only after being put up for auction.

The announcement came as three artefacts recovered in the USA were returned to the Italian government in a repatriation ceremony in Washington DC.

The ancient Greek items – a wine carafe, a decanter for precious oils and a soup tureen – had been illegally dug out of an archaeological site in Italy and smuggled into the US, where they were listed for sale at a New York auction house.

Eagle-eyed Italian Carabinieri officers, from the country’s famous ‘art squad’ or cultural heritage unit, alerted the FBI after spotting auction listings for the items while doing a routine daily check of online auctions. The items were handed back to Italy in a ceremony at the headquarters of the Italian Embassy in Washington, where Italy’s culture minister announced the government would be cracking down on such crimes.

“We want to introduce laws on specific crimes so there are stiffer penalties applied to crimes against cultural heritage, which is a fundamental part of our identity,” said the Culture Minister Alberto Bonisoli.

Along with the government’s new draft law, he said Italy would soon be ratifying the Nicosia convention, an international agreement establishing penalties for offences such as unlawful excavation, importation and exportation, illegal acquisition and sale of cultural artefacts.

The ceremony marked more than 15 years of collaboration between Italy and the US in the fight against the illegal trafficking of stolen artefacts.

Art crime is a huge problem in Italy, where artworks are stolen from unguarded churches and even from secure museums, and illegal excavations can uncover valuable historical treasures.

Over one million artworks are currently listed as missing or stolen.

Italy became the first country in the world to create a specialized police force to combat cultural crimes back in 1969.

The three items were the latest of 16 precious art and archaeological artifacts recovered in the US and returned to Italy over the last two years.

The return and protection of Italian cultural items has been a stated aim of the country’s populist government made up of the Five Star Movement (5SM), of which Bonisoli is a member, and the League.