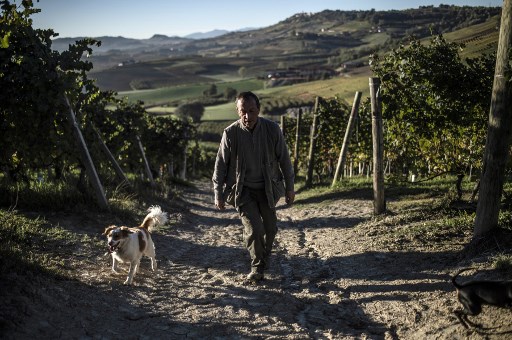 The labrador wags his tail, happy to have found the hidden treasure as he graduates from Italy's “truffle dog university”, doing his master proud.

Giovanni Monchiero is the dean of the unusual academy in Roddi in northwestern Italy and, like his father, grandfather and great-grandfather, transforms “normal” dogs into expert seekers of the lucrative fungus. Giovanni Monchiero and one of his students at work. Photo: MARCO BERTORELLO / AFP

“Teaching a dog to find truffles is very simple, you just need plenty of patience and to realise that for the dog, it's a game,” said Monchiero, 55.

“We start by getting the dog to play with the truffle. Personally, I use a fresh truffle, but if you don't have one you can put some truffle-scented oil on a tennis ball. You throw it, the dog has to retrieve it and you reward him with dog biscuits.”

Then the master makes the game a little more complicated by throwing the truffle into long grass, where the dog can't see it.

“That's when you start giving commands: go on, find it, you've found it, well done! You have to always congratulate and reward,” Monchiero said.

“Once the dog has learned the truffle aroma, the next step is to bury the truffle, not very deep at first.”

Graduates then delight in unearthing the knobbly fungi lurking among the roots of oak, linden, willows or poplar trees — with which they have a symbiotic relationship.

Roddi is in the Alba region, famous for its white truffles, “distinguished by an intense perfume, evocative of the woods, of nature,” said Antonio Degiacomi, head of Italy's National Centre for Truffle Studies. Antonio De Giacomi, President of the National Centre for the Study of Truffles poses with a white truffle, in the Morra Truffle Shop in Alba, near Turin. Photo: MARCO BERTORELLO/AFP

This year white truffles fetch 350 euros for 100 grams (around three ounces), down from at least 600 euros last year, with an average truffle weighing 20 grammes.

Going truffle hunting is a passion, said Monchiero, who heads out every morning and evening during the truffle season, which runs from September 21 to January 31.

The university was founded by his great-grandfather in 1880 and Monchiero's principle is that while not every dog can become a good truffle-hunter, all breeds have a chance.

“Some dogs are predisposed to find truffles, others are not,” said Monchiero, who has even trained a small German Pinscher to sniff out the delicacy destined for the finest restaurants.

He has trained dozens of dogs, usually one or two at a time.

“Master Monchiero is the best in the whole Piedmont region. This is the third dog he has trained for me,” said Rocky's master, Diego Guaraldo. “He doesn't use cruel methods like depriving the dog of food, but gentler methods,” said Guaraldo, a 36-year-old lawyer, describing the university's graduates as “real champions”.

‘Crazy for truffles’
“He manages to set something off in the animal, which becomes crazy for truffles. That's what all of us truffle-seekers want. The dog must be meticulous, focused, undistracted by the smell of game,” Guaraldo noted.

“The animal can smell a truffle from 10, 15, 20 metres away,” Guaraldo said of his graduate dogs.

The three-week education costs 400 euros and Monchiero says he gives three classes a day — but he stops for an hour or two when he sees that his charge is bored or tired. This is a basic course. To become a good truffle dog takes on average three years. What's important is to keep training the dog, not necessarily every day but every other day,” Monchiero said.

Rocky meanwhile has all the potential to become an excellent truffle dog – except for his weakness for eating his finds.

But it’s not a problem, said Monchiero.

“He knows how to seek out the truffle and to find it. He just needs to learn to hand it over in exchange for a biscuit,” he said, noting that some dogs always nibble a bit of their truffle.

“Better a slightly damaged truffle in your pocket than a perfect truffle in someone else's!”