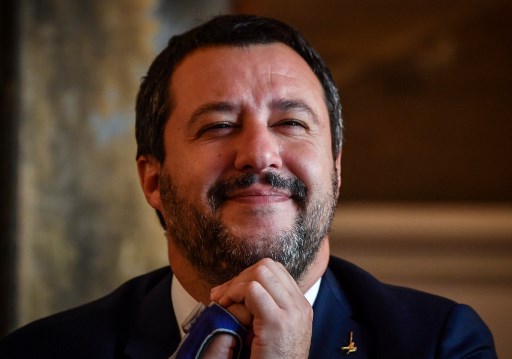 The populist government of Salvini's League and Luigi Di Maio's anti-establishment Five Star Movement (M5S) won the vote with 163 senators for, 59 against and 19 abstentions, including five M5S members opposed to the stringent decree.

The lower house of parliament now has until the end of November to approve the decree, which the coalition first put forward in September, and makes it easier to expel migrants and strip them of Italian citizenship.

The government opted for a confidence vote to get the decree through the senate after M5S members tabled a slew of amendments.

It should now have no problem passing the lower house given the coalition's majority.

A delighted Salvini tweeted that it was a “historic day” after the vote.

The decree will put an end to two-year “humanitarian protection” residency permits — a lower level of asylum status based on Italian rather than international law — that were awarded to 25 percent of asylum seekers last year.

The remainder were rejected. If appeals fail, they face the prospect of being classed as economic migrants who must return home.

Those seeking refugee status will also now have their requests suspended if they are considered “socially dangerous or convicted in the first instance” of crimes, while their appeals are ongoing.

They will in future be housed in bigger reception centres, while only minors and those with recognised refugee status will be housed in different parts of the country in order to facilitate integration.

The Italian Refugee Council said it was “seriously concerned” by the new law.

“The abolition of humanitarian protection will put thousands of people outside the law and only a very few can be repatriated,” it said in a statement.

A new procedure to fast-track the expulsion of “dangerous” asylum seekers will also be implemented.

The United Nations refugee agency said ahead of the vote that some of the decree's provisions “do not provide adequate guarantees, especially for the vulnerable or those with particular needs such as victims of abuse or torture”.

“Lawmakers still have time to do the right thing.”

The Italian mayors' association has railed against the change, saying that having hundreds of unemployed migrants in reception centres can have a negative impact on small communities.

The new law also lets local police have Taser stun guns, and makes it easier to evict squatters by getting rid of the obligation of finding provisional housing for the most vulnerable.

One of the most controversial measures in the bill provides for stripping immigrants of their Italian nationality if they are convicted of “terrorism”.

“We must welcome those who are fleeing war, but there is no place for economic migrants,” Salvini said. “Whoever flees a war is my brother, but whoever comes here to sell drugs and create disorder must go home.”

Salvini, who is also deputy prime minister, has taken a hard line on immigration since the coalition came to power in June, refusing to allow several ships carrying migrants rescued in the Mediterranean to dock at Italian ports.