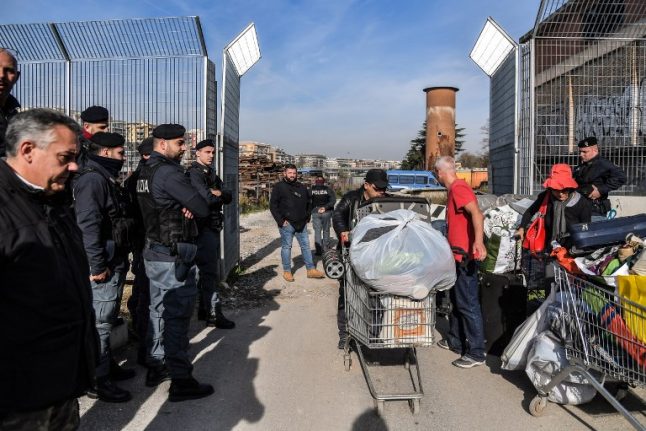 Police look on as people pile belongings into trolleys during the camp's eviction. Photo: Tiziana Fabi/AFP

Armoured police vehicles arrived at dawn outside the camp known as 'the Baobab', near Rome’s Tiburtina station, which has hosted tens of thousands of migrants during their journeys to northern Italy and the rest of Europe.

But in recent days it has also taken in dozens of documented immigrants who had nowhere else to go, after being shut out of reception centres following the passing of an 'anti-migrant' security decree.

“Stateless, lawless no-man's lands will no longer be tolerated,” Interior Minister Matteo Salvini, head of the far-right League, said as diggers rumbled through the camp, run by the Baobab Experience association.

Men could be seen wheeling away their belongings in shopping trolleys, while youngsters hugged tearfully as tents were dismantled around them, according to an AFP photographer.

A cut-out photo of Salvini's head glared from the side of a rolled up mattress as a crane swept up discarded belongings in the abandoned parking lot near Rome's two main train stations. Around 100 migrants had been living there after leaving Italy's reception system, voluntarily or otherwise.

In 2015, when the borders were still open, some 35,000 migrants transited through Baobab on their way to the rest of Europe. The camp had been located in an old factory at the time.

The association was behind a protest last week against Salvini's “inhumane, dangerous and unacceptable” security decree, which the UN's human rights body has said conflicts with international laws on refugees and human rights.

“It's already the 22nd time that the camp has been cleared, but I think this time it has been shut down for good,” Baobab coordinator Andrea Costa said.

According to an initial police estimate, about 150 people were evicted. About 120 were reportedly taken by bus to the immigration offices at police headquarters in Rome.

The other 30 people, including an Italian family, were released as they had identification documents. Most are believed to be asylum seekers afforded humanitarian protection.

“There are still at least a hundred people the city has not yet taken charge of,” said activists at the camp. which in the past few days has sheltered dozens of regular immigrants who had been evicted from city shelters and left with no alternative.

Following the passing of the decree on November 7, the shelters can only accommodate refugees and no longer recognise the lower status of humanitarian protection.