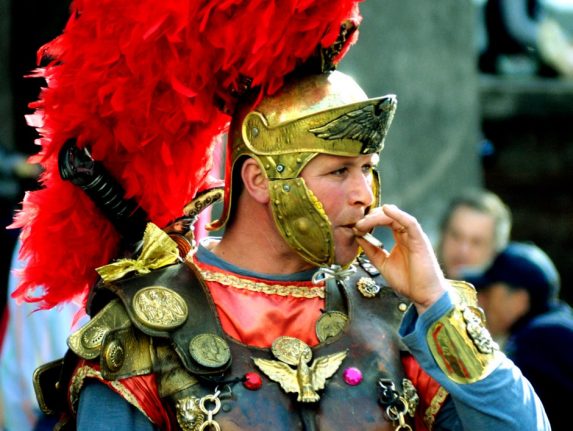 A man smokes while dressed as a centurion in Rome. Photo: TomaB/Flickr

Street drinking, dressing as a centurion and organising pub crawls will all be permanently banned under new laws brought in by Rome’s city council.

Fines for swimming in fountains and eating in restricted areas, which were previously temporary measures, will also become permanent.

500 new vigili urbani (city police) will also be employed to enforce the rules, she said.

While many in Italy view them as little more than traffic wardens, in Rome the city police, which enforce local government rules, have the power to hand out fines and ban people from public areas.

Rome has for years imposed various temporary measures, fining costumed ‘gladiators’ (which is what they call themselves, despite dressing as Roman centurions) as the city accuses them of over-charging, harassing and pick-pocketing unsuspecting tourists.

Now, rules imposing fines of up to 400 euros on anyone caught dressing as a historical figure for photos will now become permanent.

Strict new rules against street drinking will also be kept in place permanently.

Earlier this year, Rome’s city council brought in a measure banning nocturnal outdoor drinking in every part of the city, with the notable exception of the district in which Raggi herself lives.

Originally a temporary measure set in place until March 2019, this too will now become permanent.

It’s forbidden to consume alcoholic drinks in glass containers on public streets after 10pm, while from midnight onwards, the ban extends to any outdoor consumption of alcohol in any kind of container.

From 2am, it’s completely forbidden to serve alcoholic drinks – even in indoor bars and clubs.

Anyone caught flouting the new law could face a fine of €150, while for business owners selling alcohol after the curfew that fine increases to €280.

Business owners have criticised the new alcohol controls. In the San Lorenzo district, which is known for student nightlife but also for drug dealing, shop owners say their customers have now disappeared thanks to the alcohol ban but the drug dealers remain.

The city also introduced fines for anyone eating near or climbing on fountains in the Eternal City earlier this year. These fines will also now become permanent.

The Trevi fountain is one of the city’s main magnets for badly-behaved tourists.

Fines for swimming in the fountain have been in place since 2015, but this hasn't stopped determined visitors from recreating scenes from La Dolce Vita and even some locals from having a dip. Tourists at the Trevi Fountain in Rome. Photo: Vincenzo Pinto/AFP

Eating and drinking is also forbidden at other historic and cultural sites, including the city's recently restored Spanish Steps, where tourists have been hit with hefty fines for illicit snacking.

Measures designed to deal with the downsides of mass tourism are nothing new in Italy and are mostly greeted with approval.

The Daspo Urbano is an exclusion law, similar to an ASBO (anti-social behaviour order) in the UK, officially brought in across Italy this year. It allows police to fine and restrict the movement of people they deem a threat to public order.

The law was first introduced in the 1980s to control football hooliganism; Daspo is an acronym for Divieto di Accedere alle manifestazioni Sportive, or “Sports Event Access Ban.”

But the ‘urban’ version of the Daspo was created to allow authorities to remove people they deem to be engaged in “indecorous behaviour” from designated city zones.

Police can impose a fine of up to €900 and ban people from an area for 48 hours. If the banned person continues to cause problems, their Daspo can be extended for up to a year. The new measures were announced as the mayor comes under increasing pressure to tackle degradation and “disgusting” living conditions in Rome.

The capital is becoming notorious for urban squalor, and protesting residents last month called the city a “rubbish dump.”

A catalogue of problems in the city includes inefficient (and possibly corrupt) rubbish collection, giant potholes, a collapsing escalator, and public buses that catch fire with alarming regularity.