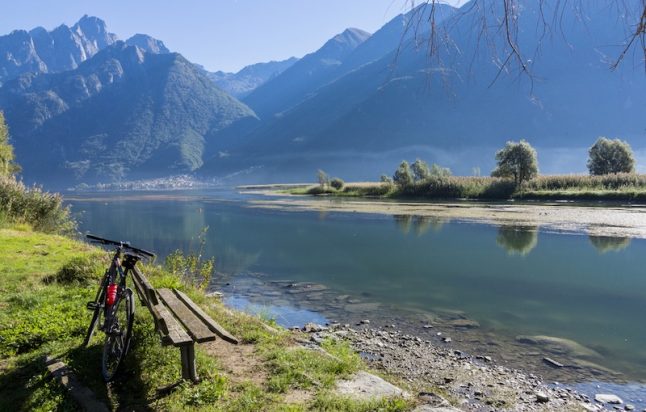 Lake Como – Liberty Style villas and gardens, pastel-coloured villages and mountains that plunge down into the lake. Pliny the Younger, Bryon, Stendhal, Goethe, Mark Twain, Gianni Versace and George Clooney all loved or love it.

Yet it’s not just a playground for the wealthy and famous. Get off the usual tourist trail and there are pleasant surprises galore.

And don’t stick to just visiting in summer: granted, a lot of places close during winter, but you can always ring in advance or take a picnic for a day trip. The mood of the lake changes according to the season. Autumn seems more melancholy, spring shows more promise, and nothing beats the beauty of snow-topped mountains against clear blue skies in winter.

Read on for a local’s guide to the lesser-known parts of Lake Como.

Alessandro Manzoni describes the eastern branch of Lake Como at the beginning of his novel The Betrothed. This is the land of those uninterrupted chains of mountains, numerous bays and inlets as you go south towards Lecco and Mount Resegone above it.

This side of the lake is famous for its 45 km-long Sentiero del Viandante – the old mule track stretching back as far as Roman times – that goes from Abbadia Lariana to Colico and offers great walking in any season. The Viandante begins near the chapel of San Martino south of the small hamlet of Borbino, and passes through the pretty hamlets of Linzanico, Crebbio and Maggiana with watchtowers along the way.

Abbadia Lariana (literally, 'the abbey of Lake Lario') is the first village, popular for its white pebbly beach and holiday atmosphere, and a lakeside walkway that’s lit up at night. For food, go to Camping Spiaggia or the “campeggio” – the campsite, as it’s known amongst the locals, for drinks, cocktails, bar food, pizza in the evening and live music. It gets busy, so book in advance.

Further up is Mandello del Lario below the Grigna mountain massif, home of Moto Guzzi motorbikes. Not just a pretty open lakefront, it’s worth walking up to the centre of town to explore its narrow streets. Take the road upwards to the pretty medieval hamlet of Maggiana that’s built around the Torre del Barbarossa, the tower and residence of Frederick Barbarossa, the Holy Roman Emperor. Near here Osteria Sali e Tabacchi has an excellent reputation for local food, while Mamma Ciccia is a café bistro, B&B and cookery school just off the marina.

The road from here goes up through Varenna until you reach Bellano, a pleasant town known for its Orrido, which is actually a gorge but with a name that means 'horrific' in reference to the howling echo it makes.

Drive up above Bellano to Crotto di Biosio restaurant in the hamlet of the same name for, amongst other local dishes, chisciöi – fried buckwheat pancakes filled with local Casera cheese. Behind the lakeside terrace lies a crotto – or grotto – typical of the area that functions as a natural fridge. Cold air comes out of the mountain and maintains a temperature of between 4 and 8 degrees. Originally known as Crott de Balin, for decades the restaurant has been a stop-off point along the Viandante for a glass of wine, a couple of slices of salami and a game of cards.

To pick up the Viandante, turn right as you’re facing the crotto southwards down the lake, up through a cluster of houses and keep going. You’ll walk above the lake with views to soothe any soul.

Take the SP36 state highway as far as Colico, to the northern area of the lake known as Alto Lario. Then turn left along the top of the lake through the Natural Reserve of Pian di Spagna and Lago di Mezzola.

This natural plain at the base of both the Valtellina and the Valchiavenna lies between the northern end of Lake Como and Lake Mezzola, both connected by the River Mera. It’s an area of wetlands, and a migratory bird environment where birds both rest and nest. It’s also a great place for walking and mountain biking. For information about the reserve and itineraries, see the reserve's website. Dascio is a hamlet of the village of Sorico on the opposite side of the River Mera to the wetlands. It’s a quiet spot at the end of the Roman way known as the Via Regina, one of the oldest trade routes that linked Italy and Switzerland.

For lunch, both Hotel de Mera and Hotel Berlinghera are family-run hotels each with their own restaurant serving lake fish and traditional dishes from the Valtellina.

Then walk it all off up to the Sasso di Dascio for views of the Pian di Spagna and the lake. Sorico is known for its wide sandy beach, one of the best on the lake and is a popular place for windsurfing, kitesurfing and sailing thanks to the Breva wind that generally gets up around midday.

Tourism is based around family-run campsites and camper vans with an easy and relaxed atmosphere, with an emphasis on water sports, walking and cycling. Lakefronts are wide and spacious, great for just wandering along and soaking up all those mountain views. The cycle path from Sorico (Ponte del Passo) to Domaso is 9 km long and goes firstly alongside the River Mera and then by the lake. Stop at the town of Gravedona with its white pebble beach and lido, and visit the beautiful 12th-century Romanesque church of Santa Maria del Teglio.

William Wordsworth came to Gravedona and got lost in the mountains above; he found a rock to sit on and just wait for morning, and then wrote about the whole experience in The Prelude.

You could a do lot worse here than just finding your own rock and if not quite waiting for morning, just whiling away a half hour or so. Take it slowly, savour those views and just enjoy being in one of the most beautiful destinations Italy has to offer.