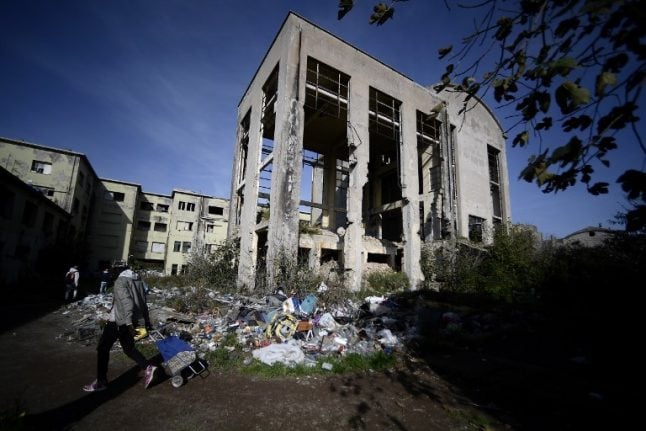 “We are human beings, not Martians,” a Senegalese spokesman for the group, John, said as journalists on Wednesday were shown around the premises, where some 500 migrants live among expired chemicals, asbestos and rats.

“We've been told we're soon going to be evicted. But lodgings are a human right,” he said. “Give us an alternative!” The visit served as a counterpoint to a separate media event put on Wednesday at a military airbase near Rome by Italy's interior minister, Matteo Salvini, who met dozens of African migrants recently evacuated from Libya by the UN.

Salvini is at the forefront of efforts to make it harder for migrants rescued at sea to be taken to Italy. Since the coalition he is part of came to power in June, he has refused to allow several ships carrying migrants rescued in the Mediterranean to dock at Italian ports.

His League party is also behind a planned decree that would make it easier to evict and expel migrants, strip some of Italian citizenship, and reduce access to temporary “humanitarian protection” residency permits.

At the airbase Salvini insisted that “Italy is a welcoming, generous and supportive country” — but warned would-be immigrants that “the only way to arrive is by plane, not by inflatable dinghy”. Around half the migrants crossing the Mediterranean from Africa to Europe head for Italy, according to the UNHCR refugee agency. Since January this year, more than 2,000 have died on the perilous trip, which UNHCR called “the world's deadliest sea route for refugees and migrants”.

Many of the migrants in the Rome squat said they were waiting on responses to asylum applications but were unable to find sufficiently well-paid work to live elsewhere. Associations helping migrants said there was a “war against the poor,” with city authorities not giving accommodations to those evicted from squats.

On Tuesday, around a hundred migrants found themselves without shelter when police razed a Rome camp that had been an emblematic waypoint for thousands who had made the journey to northern Italy.

Salvini has vowed to empty around 30 other squats in and around the capital.