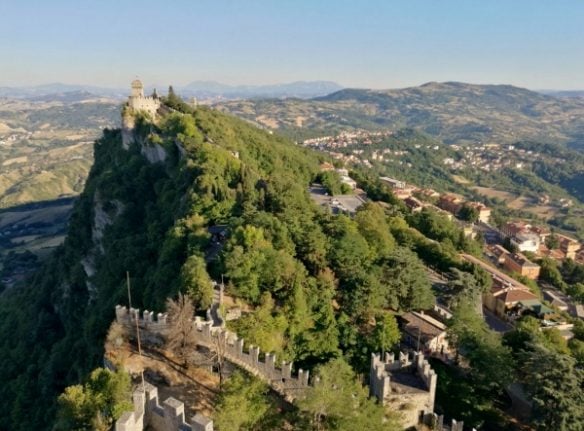 How can you be in Italy, but not in Italy? No, I'm not talking about the Vatican. There's another miniature country on the peninsula which is at least equally as fascinating.

The Most Serene Republic of San Marino is a mountainous microstate on the border of Le Marche and Emilia-Romagna, just a 40 minute drive from Rimini.

There’s no hard border or Vatican-style security check, but you can get your passport officially stamped – for five euros.

San Marino is an echo from an era when city-states proliferated across Europe, the sole survivor among the independent states that madeup the Italian peninsula before the unification of Italy. It’s the world's oldest republic and Europe's third smallest state.

The imposing hulk of Mount Titano, part of the Appennine range, dominates San Marino's landscape and the Unesco-listed capital San Marino City, or Città di San Marino, is draped right across the top of it.

As we approached from the road, Mount Titano loomed ahead, jutting improbably out of the rolling green landscape. As we got closer I could see that it was crowned by a ring of battlements linking what looked like three small castles, each set on a rocky outcrop.

It’s a slightly surreal sight as you approach from the road, and driving almost all the way to the top seemed unlikely from down there. But you can, and we did, along a series of steep roads with hairpin bends and incredible views across a green patchwork landscape.

The view from the road, halfway up the mountain. Photo: Clare Speak/The Local

You can park up next to a piazza about halfway up and take a toy train the rest of the way into town, but the long queue convinced us to keep driving and cross our fingers for a parking spot further up.

Also because we were told that the train only takes people up, and never back down. When I asked why the attendant just shook his head grimly, saying “it’s a long story.”

The city itself, which feels nothing like a city, sits at 700 metres above sea level, higher than any in Italy.

Looking out over Le Marche to the Adriatic Sea from San Marino. Photo: Clare Speak/The Local

That day the narrow streets were packed with tourists; mostly Russians staying in Rimini, or Italian families on day trips. I wouldn’t have believed it then, as people jostled me with selfie sticks and bags full of duty-free alcohol, but apparently San Marino is the least-visited country in Europe. It only gets 60,000 visitors per year.

San Marino only has 30,000 inhabitants, meaning it has more vehicles than people. But none of the cars are allowed within the old city walls.

The three towers are the symbol of the city (and the national flag) and also the main attraction, though you can only visit two of them; Guaita and Cesta. The Montale tower, the smallest, has the best view of all but is sadly off-limits.

The views from the other two towers are impressive enough, and you can explore all of 11th-century Rocco Guaita, briefly used as a prison, right up to the tiny top floor of the tower reached by rickety steps.

The second tower, Castello della Cesta, is a bigger structure which is home to a Museum of Ancient Weapons. The towers and battlements almost seem to touch the clouds, and feel like something straight out of a fairytale.

And that incredible landscape spreads out below like your very own 3D map of Italy.

As we were leaving, an outdoor concert was starting in a tiny piazza next to the castle. We stopped for a while to listen, and I was told that in summer such performances happen several times a week, beginning in the late afternoon or early evening.

After the castles, the second biggest draw in San Marino seemed to be the tax-free shopping. As well as the usual tourist gift shops San Marino is packed with perfume, jewellery, designer sunglasses and, more disturbingly, numerous gun shops.

I was told that the guns were all replicas, just here to attract tourists, and that buying firearms is as heavily restricted in San Marino as it is anywhere else in Europe.

One thing that's definitely not a bargain here however is bottled water, or drinks of any type. They seem to carry a huge premium at every shop in town, so make sure you bring your own.

The republic finally did become serene at around 5pm when the crowds seemed to vanish all at once, and we suddenly found ourselves more or less alone, wandering the narrow cobbled streets.

The historic centre is as pretty as you’d expect any medieval Italian town to be. There’s plenty of atmosphere and almost the entire centre is pedestrianised.

You can also walk along some sections of the city walls, and sights include the city’s tiny parliament building and the Basilica di San Marino, a Roman-style church. The liberty statue and Public Palace, used as the parliament building. Photo: Crisferra/Depositphotos

It's hard to see why San Marino gets so few visitors. While some travel blogs excitedly call it a 'hidden gem', it's far from unknown, as one one look at the large number of souvenir shops will tell you.

The location doesn't help. San Marino is hard to get to, far from the biggest tourist hotspots in Italy and really requires a car, though there are some buses from Rimini..

Maybe all those replica gun shops are putting people off – or the peculiar one-way train.

But there are plenty of good reasons to visit. While the historic centre of San Marino City gets busy in summer, it’s nowhere near the severe overcrowding in Florence and Venice, or the hordes flocking into the Vatican. Plus there’s cool, fresh mountain air, tons of history and those incredible views over Le Marche.

And if you don’t mind the cold, visiting out of season means the same fantastic views and no crowds at all.