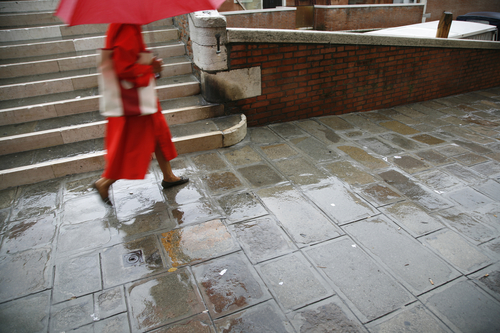 A woman walks down a rainy street in Venice. Photo: abcdk/Depositphotos

It looks like winter is arriving in Italy this weekend. From Friday afternoon currents of cold air are forecast to arrive from Russia, causing temperatures to drop by as much as 10 degrees across the country, starting from the Adriatic coast and sweeping across Italy during the weekend.

Saturday will be crisp, sunny and cold, with temperatures reaching zero overnight in some areas and a light overnight frost expected.

Rain is forecast in southern and central regions from Sunday.

The ‘falling stars’ from the meteor shower are best observed in Italy on Saturday evening and around dawn on Sunday, as the earth passes through the debris left by comet Tempel-Tuttle. A meteor shower seen from the Italian Alps. Photo: Depositphotos

On Monday and Tuesday snow is forecast to arrive at 400 metres in Piedmont and Lombardy, with a chance of snow in Milan, when temperatures will drop again.

Temperatures are expected to be especially low in the central-northern regions. Lazio and Emilia-Romagna will feel the chill first this weekend before it intensifies across the country on Monday, and rain is also forecast in these areas.

More rain is expected in southern regions. The south is also expected to be cold, even though temperatures won’t plunge as dramatically.

Next week will be colder again. Experts warn of possible storms and flooding in Lazio and Campania from Monday.