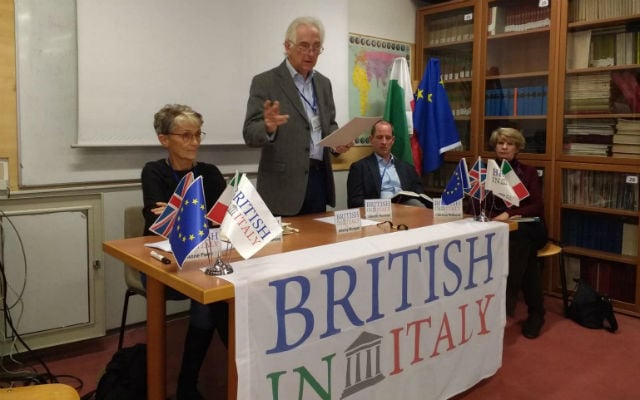 British in Italy, the country branch of the grassroots campaign group British in Europe, held an open meeting in Venice on November 20th with a view to finding solutions for various potential Brexit outcomes and to qualm the fears of some of it members.

The newly-approved ‘decreto sicurezza’, a new package of immigration laws, foresees that all citizenship applications via naturalization or marriage now need to be processed by the Italian government in four years, as supposed to two. This would mean that applications by Brits may not be reviewed before the end of the transition period.

The meeting in Veneto, northern Italy, also reviewed British in Italy's lobbying regarding ring-fencing and amendments to the decreto, according to a British in Italy member who attended the event.

Despite the UK government announcing a new draft text agreement, which, if approved by the UK parliament, would see Brits in Europe retain their current EU rights until the end of the transition period in December 2020, British in Italy is still preparing for a no-deal outcome.

“We now have to work hard with the Italian administration to ensure that there are systems in place on 29 March to avoid the potential chaos when we lose our rights as EU citizens,” states a post on British in Italy’s Facebook page, following the November 20th meeting in Veneto.

Angelo Tosoni, vice president for the Veneto of the National Association of Local Councils, also attended the meeting and “promised to pursue the matter,” according to British in Italy’s summary of the event.

British in Italy is calling on the 26,000 registered Brits in Italy – some estimates say there are up to 65,000 Brits in Italy – to write to their local ‘sindaco’ – mayor – to make sure they are aware that Brits could become “clandestine” citizens on March 30th, 2019 (in the event of a no-deal and the Withdrawal Agreement, which covers citizenship rights, being scrapped) and to ensure municipal authorities are informed and prepared.

“The French and German governments have already started passing laws to give some certainty to Brits in this situation, but so far the Italian government has given no clear indication that it is preparing for what will happen on 30 March, whether it be under the terms of the Withdrawal Agreement or a no-deal,” adds another recent post by British in Italy.

A source close to the matter told The Local that the Italian government could apparently make a statement on the matter in the coming days.

Are you a Brit in Italy worried about what you should do if Brexit talks collapse? Check out British in Italy’s checklist for a no-deal scenario.

The British Embassy in Rome is hosting a discussion on citizenship rights in Rome on November 26th from 17.30 to 19.30 at the British School in Rome, Via Gramsci 61. Those wishing to attend should R.S.V.P. to [email protected].

READ MORE: A Brexit checklist for Brits in Italy