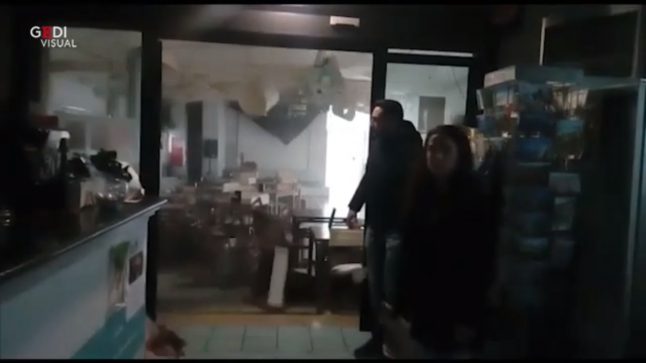 The area was hit by hailstorms and flooding in October, killing a young mother and her two sons in Calabria.

In Capo di Leuca, a small town on the very tip of the heel of Italy's boot, the Menamé bar-restaurant was completely destroyed on Sunday by a whirlwind, in a scene the bar's owners managed to capture on video.

The Santa Maria Assunta church in the nearby town of Marina Serra also experienced severe damage to its vaulted ceiling and the partial collapse of its façade.

Trees were uprooted along a 20 km stretch of coastline and 12 boats sunk in the Marina Serra.

Later this week heavy rain, thunderstorms, and strong winds are forecast to move across from Sardinia to the southern regions of Calabria, Campania, and Apulia, which may also experience further tornadoes.

Italy's Civil Protection Service has issued a yellow alert for the affected areas, which also include Lazio, Umbria, and Abruzzo in central Italy and Veneto in the northeast.

Italy has been hit by 38 tornadoes this November, a 138 percent increase on the same period last year, reports La Repubblica.

Meteorologists say the phenomenon is being caused by unseasonably high temperatures in the Mediterranean clashing with cold air coming in from the Atlantic, triggering extreme weather events.

A spokesperson for Coldiretti, Italy’s national agricultural association, said: “Exceptional weather events have become the norm: this provides confirmation of the current climate changes that coincide with a higher frequency of violent events, seasonal displacements, short and intense rainfalls, and rapid transitions from heat to bad weather.”