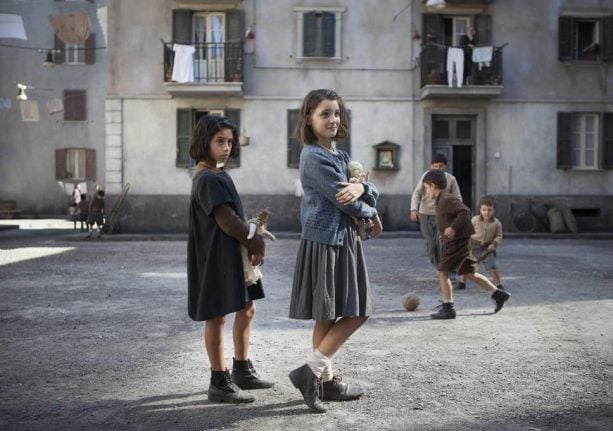 Still from the first season of My Brilliant Friend. Photo: Rai/HBO

Like My Brilliant Friend, Gomorrah also takes place on the harsh and unforgiving streets of some unnamed suburb of Naples. That’s where the similarities end, however.

Gomorrah follows the fortunes of a ruthless crime family and its associates as they compete for wealth and power. Pulled between business and blood feuds, familial bonds and betrayal, its protagonists alternate between the roles of villain and victim, and are frequently both at the same time.

Dark, brooding, and beautifully shot, the artistry of its cinematography jars with Gomorrah’s brutal content. This is one to watch only if you can handle (occasional) extreme violence and cruelty, but it’s well worth seeing for its nail-biting plot twists and genuinely wrenching turns.

The Netflix series Suburra could be described as Rome’s answer to Gomorrah, but the similarities are only surface-level.

Unlike Gomorrah, which is told almost entirely from the perspective of Naples' crime lords and their entourage, Suburra tracks between the outwardly respectable worlds of church and state and the grimy underworld of local drug kingpins, showing how the two are woven together in  a web of corruption.

If you were wondering how organised crime managed to infiltrate the very heart of Rome’s government, Suburra is your way in.

If you need some light relief after all that vice, check out Boris, a light-hearted comedy that takes place behind the scenes of the (fictional) execrable daytime medical soap opera Gli occhi del cuore (Eyes of the Heart).

Through the eyes of Alessandro, a hapless intern, we meet the show’s self-obsessed stars, its lacklustre production team, and its beleaguered director, and are gently instructed in the absurdity of harbouring any professional or creative ambition in the Rome film and television scene.

Granted, the Fantozzi films aren't actually a TV show… but they are a series that lend themselves to binge watching.

In these comedies from the '70s, '80s and '90s, we follow the exploits of Ugo Fantozzi, a downtrodden and unprepossessing office peon dissatisfied in both his work and home life. He works for Megaditta ('Megacorp') and dreams of better things, but ultimately lacks the wherewithal to escape his drab and unfulfilling existence.

The films' pitch-perfect physical comedy and situational humour arguably make Fantozzi Italy’s answer to Mr. Bean. In his desperation, however, Fantozzi is an altogether darker creation, with more in the way of social commentary delivered through mild satire.

The first 1975 film Fantozzi and the 1976 sequel Il secondo tragico Fantozzi, starring the books' creator Paolo Villaggio, are by far the best of these. Start here.

If you want something more substantial than comedy but less violent than a mafia crime thriller, consider the four-part mini-series La meglio gioventù, or The Best of Youth, a sweeping epic that tells the story of a 40-year period in Italian history by chronicling the lives of two close but very different brothers.

La meglio gioventù follows Nicola and Matteo from their adolescence in the '60s to adulthood and then middle age in the early 2000’s as both they and their country undergo irreversible changes. Combining intimate family drama with social history, the series feels almost novel-like. If you love My Brilliant Friend and want something along the same lines, this would probably be the best place to start.

Not, in fact, a show about medieval doctors, I Medici tells the story of the Medici family, the fathers of the Italian Renaissance.

Filmed in English to maximise its international licensing potential, I Medici was co-produced by Rai and aired dubbed in Italian on primetime television, so it is to all intents and purposes an Italian series as far as Italians are concerned.

If you feel like relaxing at the end of the day with some hammy but enjoyable medieval melodrama, and/or want to learn about Renaissance history (with a *large* pinch of salt), kick back to I Medici, the second series of which was released in late 2018.