Driving in Italy can be a daunting prospect. No doubt you’ve heard all about the ‘crazy Italian drivers’ already. And then there are new road rules to follow, and signs in a foreign language.

Add the extra challenge of driving on the other side of the road, if you’re coming from the UK, Ireland, Australia or other left-hand countries, and you might just decide not to bother driving in Italy at all.

But when you get out into the countryside, driving here is definitely worthwhile – and it’s essential if you want to explore rural areas.

And once you've got the hang of driving Italian style, you might even enjoy it.

So to help you on your way, here are some practical tips based on readers’ experiences of driving in Italy, as well as my tens of thousands of kilometres of travelling up and down the country by road. 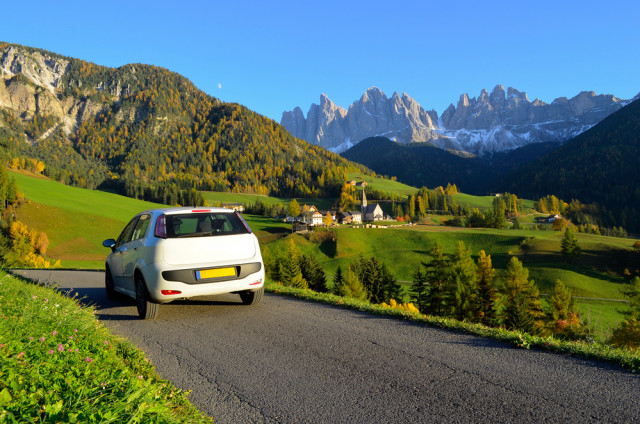 Driving in the Dolomites. Photo: pljvv1/Depositphotos

In fact much Italian driving etiquette is dictated by unwritten rules, which unlucky foreigners usually have to learn the hard way.Friends from Florence joke that road signs are “just there for decoration” and it does seem like no one pays much attention to the written road rules in Italy.

Flashing, for example, means 'Get out of the way' or 'Don't pull out because I'm not stopping for you'. But if an approaching car flashes you, it's warning you that there's a police check ahead.

And although you can't expect people to actually use their indicators, you’ll quickly notice that Italians love to blast the car horn at any opportunity.

Here it’s a bit of fun. It can mean anything from “get out of my way” or “use your indicator!” to “Ciao!' or “Let's celebrate, the light has turned green!”

And then there’s the unofficial third, middle lane on Italian two-lane roads.

“Using the broken white line in middle of the road to overtake, whether traffic is coming in the opposite direction or not, is very common,” says Sonya Boardman, who lives in Milan. “It’s not for the faint-hearted!” 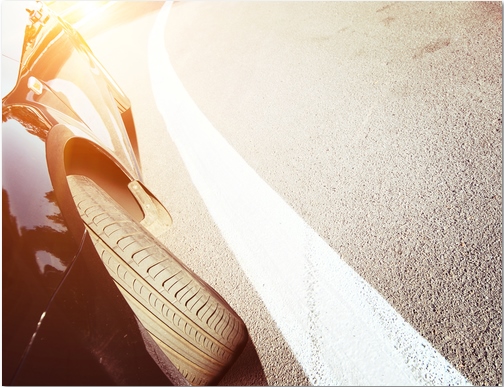 So when someone roars up behind you at high speed, shift over to the right and let them pass in their imaginary “middle” passing lane. And don’t be surprised to see people trying to pass on turns, narrow stretches or bends. Just get out of the way.

“If you’re going to drive a hire car in Italy make sure you get the waiver insurance, then you’re not worried about bumping the car,” said Shelly Evans from Lancashire, England, who hired a car in Bari when she drove in Italy for the first time this year.

“Another thing to remember is how Italian roads are not really made for the bigger car, so getting the smallest car you can cope with may be an idea.”

And bear in mind that few Italians drive automatic cars. The majority of cars here are manual (stick-shift), not automatic. That means automatics aren’t always available to hire, and usually cost more.

The autostrada is Italy's system of pedaggio or toll roads, designed for travelling more quickly than on the superstrada (non-toll motorway). Autostrada motorways are marked with an A in front of a number, such as A1, the major artery connecting Milan and Rome.

When you’re entering the autostrada you’ll take a ticket at the gate, then follow signs for the direction you want to go, usually indicated by a major city. You pay when you exit the toll road, but make sure to have cash with you as foreign credit cards don’t always work.

Not all of Italy’s toll roads are the same price, but you can use this Autostrada toll calculator to find out the cost of travelling between two points.

These toll roads are generally clean and free from traffic jams, and most stretches have plenty of rest stops with edible food, clean bathrooms, and even toilet paper. There are several rest stop companies; Autogrill is considered the best.

Sunday is a good day for long distance driving on the autostrada because trucks are prohibited on Sundays except with special permission.

Unless you're planning to race in the fast lane, leave the left lane for passing.

“Motorway slip roads are much shorter in Italy than in the UK and you’ll need to accelerate sharply to join motorways,” points out Gill Furlong.

“And gaps between cars are much shorter, due to Italians’ tailgating habit, so be prepared to accelerate fast to get into the traffic flow. Don't expect courtesy, concentration is needed… and develop eyes in the back of your head!”

Motorway driving in Italy was “an experience”, adds Shelly. “As cars don’t move over to let you in, you have to find your space and go for it. And when passing a junction where cars are joining, either speed up or slow down.”

“Stick to your decision and you’ll be fine.”

Italian drivers are famous for their apparent need to speed, and many seem convinced that speed limits are more of a general guideline than a rule, with drivers regularly exceeding the official limits.

Shelly says she found that “going with the majority was the best way” while driving in Italy. 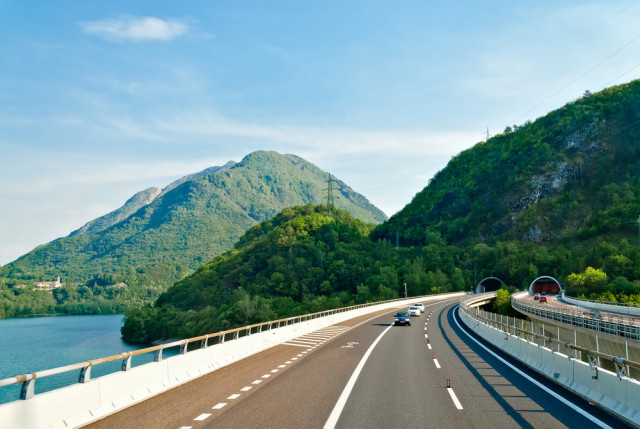 But always be on the lookout for speed cameras – and speeding drivers slamming on the brakes.

Autovelox or sistema tutor speed cameras are found on the autostrada, regular motorways, and in some towns. You should see a warning sign in advance that says Polizia Stradale, controllo electronico della velocita' (Road police, electronic speed check).

As well as the large black camera boxes you may also see a police car parked up by the side of the road.

You can receive a speeding ticket as much as a year later, and if you’re in a rental car the cost will be deducted from your credit card.

Some drivers say these speed traps cause more accidents than they prevent in Italy, as drivers tend to slam on the brakes a few feet before the camera or police car, crawl through the speed trap, and then whiz off at high speed.  More than once I’ve seen a pileup after a driver has braked sharply before a speed trap – so be wary.

When asked for advice on driving in Italian cities, most people just said “don’t.”

But if you really must, then to escape the worst city driving mayhem you should drive in the early afternoons when traffic is lighter and parking is slightly easier.

Avoid ring roads, such as Rome’s grande raccordo annulare, and basically the whole of Naples (especially La Tangenziale, which is a kind of unofficial race track.) Insurance rates are highest in Naples for a reason.

Parking is a headache everywhere from major cities to small towns. There’s never enough of it, and Italian parking wardens are surprisingly efficient.

Car parks fill up quickly, as do white-line parking spaces, which are free.

If you park on a blue line, get a ticket from the nearest meter (coins only) and display it on your dashboard. Yellow lines can sometimes be parked on for short periods, but the rules vary. 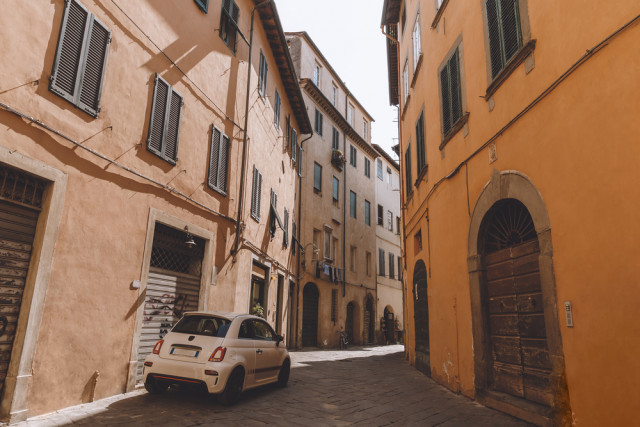 Charges don't apply overnight, usually between 8pm and 8am, but check the signs to be sure.

These signs can however be tiny, obscured or missing altogether. Parking on unfamiliar piazzas is a risk, even if they’re full of other cars – savvy locals will know if their cars need to be removed by 6am the next morning before a market starts, but you won’t – especially if the one and only sign telling you so is hidden behind a bush.

And if your car is somewhere it shouldn’t be, it gets towed and you have to pay a €100 fine.

If your driving licence is from the US or another country outside the EU, you need one of these. It’s basically a translation of your existing licence.

When you rent a car, you probably won’t be asked for it. But if you’re stopped by the police for anything (including an accident) you might be. Or you might not. There’s no way of knowing. But technically, you’re meant to have it (along with your normal licence) when you drive, and it’s easy to get; applications are open through the AAA website, and permits are valid for one year.

Unless you speak Italian, the road signs are another challenge when driving in Italy. Luckily, most are fairly obvious. But there are a few important things to be aware of.

Zona Traffico Limitato (ZTL) means restricted traffic zone and you can get fined if you’re stopped or caught on camera driving around in one without a permit. You’ll find these zones everywhere from big cities to small villages, usually in the old town or centro storico.

Some other useful words to know include destra (right), sinistra (left), dritto (straight), uscita (exit) and pedaggio (toll), and senso unico (one way).

And an inverted red and white triangle means that you do not have right of way at the junction.

While a GPS or Google Maps can come in useful, don't rely on it exclusively. In Italy, it’s common to find two (or more) towns with the same name in different regions, so double-check the map to make sure you’re going the right way. 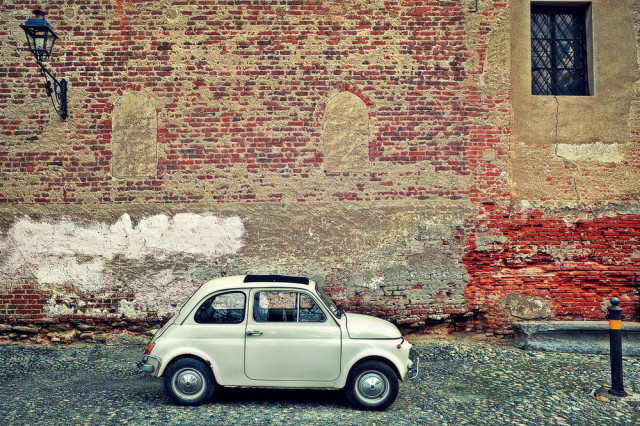 A Fiat 500 on an Italian street. Photo: angelos/Depositphotos

And navigators are notorious for directing drivers onto unsuitable roads – including dirt tracks or, in cities, into a ZTL (restricted traffic zone).

GPS systems might tell you to turn the wrong way on a one-way street or into an alley that ends in stairs. Or even, like these tourists, down the Grand Canal in Venice.

Instead, seize the moment. As soon as you see a gap, go for it. Italians are used to it. They expect the unexpected and they’ll react swiftly.

If you come from a country where things like indicating, slowing down and letting people out are seen as normal and considerate, it’s time to forget everything you know.

“When in Italy drive like the Italians, but with a little more caution,” Shelly advises. “Don’t expect other road users to move over. Remember you’re the visitor who needs to fit in.”

But most of all, she says: “Have fun and enjoy, it really isn’t that bad!”