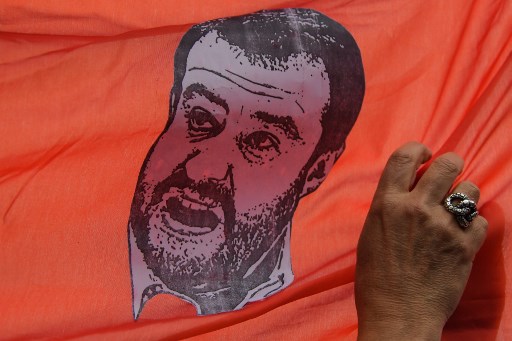 A drawing of Italy’s Interior Minister Matteo Salvini is displayed on a banner. Photo: Tiziana Fabi/AFP

The Decree-Law on Immigration and Security, pushed by far-right League leader and interior minister Matteo Salvini, abolishes humanitarian protection status for migrants and makes it easier to strip migrants of Italian citizenship.

Often referred to as the 'Salvini decree', not least by Salvini himself, it’s a package of laws made up of 42 articles.

The bill was passed in the lower house of parliament with 396 in favour to 99 against.

The Senate had already given the go-ahead to Salvini's controversial decree, which the populist coalition government of Salvini's League and Luigi Di Maio's Five Star Movement (M5S) first put forward in September.

And it had already been used to force asylum seekers out of reception centres in Rome and onto the streets.

“I'm happy, it's a memorable day,” Salvini told journalists, shrugging off criticism from “left-wingers who think illegal immigration is not a problem”.

The bill however also affects refugees and legal immigrants, particularly anyone applying for Italian citizenship.

As The Local reported last week, the decree means that all Italian citizenship applications via naturalization or marriage will now take four years, instead of the previous two, to be processed by the Italian government.

This causes further bureaucratic headaches for British nationals living in Italy, as it means their applications for citizenship won’t be reviewed before the end of the expected Brexit transition period.

The decree also ends two-year “humanitarian protection” residency permits – a lower level of asylum status based on Italian rather than international law – given to 25 percent of Italy’s asylum seekers last year, AFP reports.

Instead, residency permits will now take the form of a one-year “special protection” status or a six-month “natural disaster in country of origin” status.

A new procedure to fast-track the expulsion of “dangerous” asylum seekers will also come into force. The Italian Refugee Council has said it is “seriously concerned” by the new laws.

The decree “will not achieve in any way the objective that the legislator has set out; that is, more security in our country,” said Mario Morcone director of CIR, the Italian Refugee Council.

“The abolition of humanitarian protection will create thousands of irregular migrants who cannot be repatriated,” he said.

“The dismantling of Sprar [asylum-seeker reception centres] will create new forms of marginalisation, a drift of social exclusion that will inevitably make the people who arrive in Italy more fragile, increasing the risk of conflict and making them permeable to paths of radicalisation.”

Conte's statement on the UN pact was the latest sign that some countries who signed up to the agreement in July after 18 months of talks are now having second thoughts.

Switzerland, Austria, Australia, Bulgaria, the Czech Republic, Hungary, Israel, Poland, Slovakia, and the United States have also either publicly disavowed the pact or notified the United Nations that they are withdrawing or postponing a decision.

The non-binding UN accord lays out objectives to facilitate legal migration, as the number of people on the move worldwide has grown to 250 million, or just over three percent of the world's population.

The overall tone on migration has hardened in Europe since 2015-2016, when it took in over a million asylum-seekers, most of them Syrians fleeing the war in their country.

They said it was “high time” for a “comprehensive European… approach for all relevant migratory routes” to tackle irregular migration.

The letter called for “additional financial support” within the existing budget to enhance “relevant operational and technical measures for effective border control”.

Some member states are facing “levels of arrivals and applications equivalent to, or higher than, those seen during the migration crisis in 2015 and 2016,” the letter added.

At the end of January, European Commissioner for Home Affairs Ylva Johansson said she was confident that asylum reform — under discussion since September 2020 — would be adopted before the European elections in 2024.

The EU has earmarked six billion euros to protect its borders for the 2021-2027 period.

Several countries, including Austria, have called for EU funding to strengthen fences along the bloc’s external borders to reduce the flow of asylum-seekers.

But the commission has so far been reluctant, saying that “building walls and barbed wire” is not the right solution.

EU Commission chief Ursula von der Leyen said last month that member states could sign up to a pilot scheme over the first half of this year to speed up screening and asylum procedures for eligible migrants — and “immediate return” for those not deemed to qualify.

Von der Leyen said she wanted the EU to draw up a list of “safe countries of origin”, and for the bloc to strengthen border monitoring on the Mediterranean and Western Balkans routes migrants use to get to Europe.