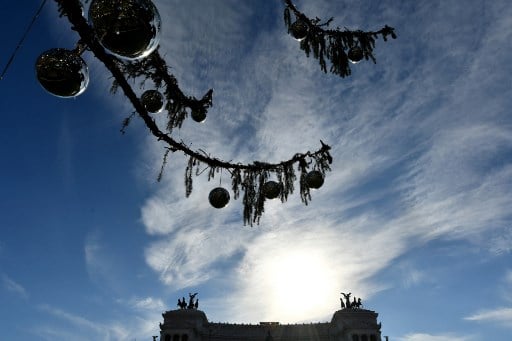 One of the sad-looking branches on last year's tree. Photo: Alberto Pizzoli/AFP

Rome’s much-anticipated 2018 Christmas tree has arrived and, with the Italian capital becoming famous for lackluster festive decorations, the pressure is on as locals demand a decent tree after two years of festive flops.

The tree unloaded at the Campidoglio in Piazza Venezia last night looked like it might be even more threadbare than its legendary predecessor, Spelacchio, as it seems to be missing more than half of its branches.

As this year’s fir tree was set up, passers-by reportedly shouted “ciarisémo!” (“here we go again” in Roman dialect).

However, the company in charge of installing the tree said some branches were cut off on purpose for the tree’s transport to Piazza Venezia, and will be reattached.

Last year, the famously ugly Christmas tree erected in Piazza Venezia at a cost of nearly €50,000 was mocked by Italians for its threadbare branches and uncanny resemblance to a toilet brush.

In fact last year's spruce – better known by its nickname Spelacchio, or ‘Baldy’ – was pronounced dead a week before Christmas last year. It had in fact been dead since it left the Dolomites, and was brought to Rome a mere trunk. Spelacchio, whose balding branches made headlines all over the world, was the successor of another ill-fated fir dubbed the “Austerity Tree”, labelled the ugliest in the world during the 2016 festive season.

This year’s tree comes from Cittiglio, in the province of Varese, and is expected to be ready for December 8, the day of the Immaculate Conception, when there will be a lighting ceremony in the presence of mayor Virginia Raggi.

The tree is more than 20 metres tall and will be decorated with 60,000 low-energy LED lights.

While it doesn’t look very impressive at the moment, let’s hope those in charge of its installation – who are working for Netflix, sponsor of this year’s tree – can work some magic on it in time for Christmas.