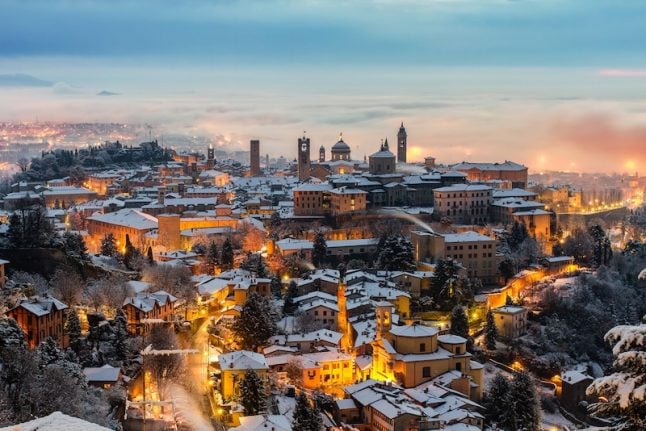 Bergamo is an easy day trip from Milan. Photo: DepositPhotos

Although the wonders of the Duomo, the Castello gardens and Brera’s cobbled lanes all hold their charms, like any city it helps to get out of the fray once in a while, even if just for the day.

As the seasons change, why not hop on a train and get out of the city to explore? We’ve rounded up a few towns that may be closer than you think… A stone's throw from Milan’s centre via a mere ten-minute train ride (at only €2.20!), Monza provides the perfect getaway when you’re feeling the pressure of city crowds.

It’s a telling sign that the wife of a Lombardian king chose Monza as her top summer destination. It’s housed emperors, kings, dukes, and celebrities, with its Royal Villa hosting everyone from Napoleon to the Savoys. Filled with Romanesque-Gothic architecture and with a black-and-white-marble Duomo all of its own, it’s also the home to some of the largest walled gardens in Europe: the gardens of the Royal Villa come to around 1,700 acres. In the 1950s this small town just outside Milan was made famous as Italy’s “shoe capital”. A thriving centre for commerce, craft, and trade, Vigevano’s main attractions remain its incredible architecture: impressive colonnades, an expansive central square, elegant columned loggias, and its very own castle.

The Castello Sforzesco originated as a hunting lodge but was transformed over time into an ornate residence with both Gothic and Renaissance influences. Sforzesco’s most famous guest, Leonardo Da Vinci, left behind some of his frescoes, most notably on the intricate ceiling of the the Sala delle Asse (“Room of Wooden Boards”). When you can visit the town today for around €3 in just 20 minutes by train, why not follow in his footsteps? Nicknamed the Leonessa d'Italia (“The Lioness of Italy”), this fiercely beautiful city set against the foot of the Alps is often forgotten by those visiting the north. A mere 30 minutes by Frecciarossa or an hour by regional train from Milano Centrale, Brescia offers some of the most stunning and well-preserved Roman buildings and artefacts in the whole of Italy (think room after room of mosaic floors).

Brescia is also a city that presents architectural jewels from every era of Italy’s history, from the towering rationalist Piazza della Vittoria with its grey pillars, to the Renaissance Piazza della Loggia with its ornamented columns. This ability to house history side by side in the city is epitomized in Piazza Paolo VI, where the city’s Cathedral of Santa Maria Assunta sits right next to its ancient domed predecessor.

Did we mention Brescia also has a medieval castle up on a hill? Oh, and it’s the home of Italian caviar. What are you waiting for? The view over Bergamo. Photo: DepositPhotos

Carry on a little further north from Brescia, around 25 miles from Milan’s centre, and you get to the layered hill town of Bergamo. Founded by the Celtic tribe of Cenomani who settled on the hills back in antiquity, the city, with time, has spilled out from its original peak, with the modern Città Bassa (“Lower City”) spread out at the foot of the hilled heart. The old medieval Città Alta (“Upper City”) is cradled in outstanding natural beauty and surrounded by defensive Venetian town walls, which are themselves a Unesco World Heritage Site.

Take a walk around the ancient city walls and climb to the city’s peak (or catch the 19th century funicular if your legs need a rest) for a view of the countryside spread out before you. On a clear day you can see the spires and skyscrapers of Milan skimming the line of the horizon. Think Medici palaces are only to be found in inner cities? Think again.

A 15-minute train ride from Milan’s city centre takes you into the heart of the small town of Melegnano, which – as well as providing a welcome riverside walk – is home to its very own Medici castle. With elaborately frescoed interiors from the 16th century and high corner towers, the palace alone makes a trip to explore this charming tourist-free town worth your time. Perhaps best known now for its celebrity clientele, Lake Como and the small town from which the water takes its name are surprisingly well connected to Milan’s metropolitan centre. Trains from Centrale take as little as 36 minutes for around €10, while a direct train from Cadorna takes you into the heart of the city in an hour for around €5.

While you’re not admiring the medieval ruins and frescoes (or spying celebrities), you can hop on a charming funicular to carry you up the hill to nearby Brunate and take in the outstanding views of the town and its spectacular surroundings from above. And if you’re ever craving a lakeside walk or swim, why not make a day of it and dip into what Mark Twain dubbed the “heaven of quiet rest”?