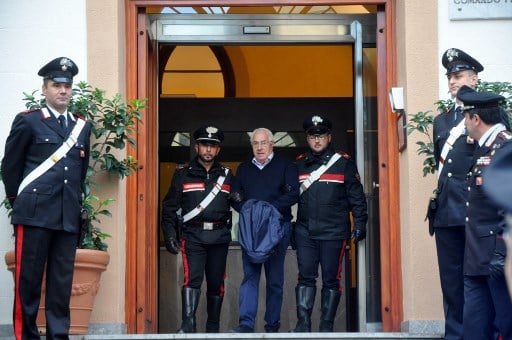 The arrest of “Godfather” Settimino Mineo has dealt Cosa Nostra a crucial blow as it tries to reorganise after the violent leadership of the Corleone family, Italy's top anti-Mafia policeman told AFP.

Police arrested Mineo, 80, and at least 45 others in Sicily last Tuesday just before he was due to be officially anointed the new “boss of bosses” at the first meeting of mafia clans, or “Cupola”, for years.

“The arrest of Settimo Mineo was an important operation because it's a kind of preventative operation at a time when Cosa Nostra is trying to reorganise,” Giuseppe Governale, the head of Italy's Anti-Mafia Investigation Directorate (DIA), told AFP.

“Cosa Nostra is having a hard time, they don't even completely control drug trafficking on the island but have to make alliances with the 'Ndrangheta (the mafia of nearby Calabria) for resupply.”

Mineo was the head of one of the 15 Mafia family groupings in Palermo province, with each grouping having two to four families.

“Four other group heads were arrested with him as well as several family heads, so this is important at a time when Cosa Nostra is trying to find an heir to Toto Riina,” Governale said.

Sicily's Mafia has historically been headed by a family from Palermo, Governale said, but that was turned upside down when the Corleone family took over in the 1960s, with unusual violence.

“When the Corleones took over there were a lot of conflicts. Some Mafiosi fled but now they're slowly returning, given that the Corleones are no longer in charge,” he said.

The last overall Mafia boss was the notorious Riina, who died in prison last year, and a reconvened “Cupola” was to anoint Mineo as his heir after meeting in May for the first time since 1993 – when Riina was arrested.

Riina and Bernardo Provenzano were proteges of Luciano Liggio, who headed the Corleonesi Mafia faction in the 1960s.
Together the three men from Corleone, around 1.5 hours drive south of Palermo, took the Mafia in the Sicilian capital by surprise using daring and, above all, violence.

“The Mafia used measured violence with precision, like a surgeon uses a scalpel, sometimes a little excessively, but the Corleones' virulence was incredible, even for the other bosses,” he said.

Hunted by police since 1993, Denaro, 56, was also considered to be a successor to Riina and Provenzano, who also died recently in prison.

Denaro played an important role in the 1980s and 1990s in Trapani in western Sicily, but police operations to try to find him have had the collateral effect of weakening any criminal structure that would consider him a boss.

In 2015, police discovered that Denaro had abandoned modern methods of communication and was giving orders to his men via “pizzini”: small bits of paper containing encoded messages.

“Now, because of his operational absence on the ground, he would have to affirm his leadership,” Governale said.