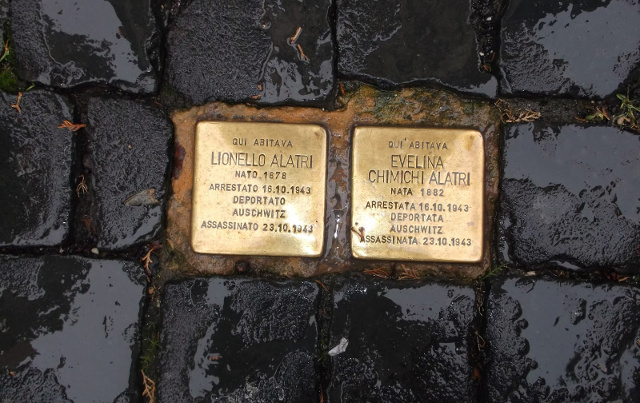 Twenty of the special paving stones, dedicated to Jews who were deported to Nazi death camps, were stolen from a street in the Rome district of Monti overnight, the association that installed them, Associazione Arte in Memoria, said today.

The stones, created by German artist Gunter Demnig, were laid in Via Madonna dei Monti in January 2012 and devoted to 20 members of the Di Consiglio family.

The family was among the worst affected in Rome, not only in the raid on the Ghetto on October 16, 1943, but also in the raid on March 21, 1944, when more than 20 members of the family were killed or sent to Auschwitz.

Each stone commemorates a Holocaust victim, with a simple inscription on the gold-plated stone, which is laid outside the person's former home.

These stones form just a tiny part of a project that's been running for more than 20 years, spanning eight countries, with over 40,000 stones.

There are – or were – some 200 of the stones in Rome, and dozens in other Italian cities.

Adachiara Zevi, President of the Associazione Arte in Memoria, told Italian media the group had been threatened with the theft of the stones.

“I am overwhelmed, it is an unspeakable thing: this act fulfils the threats that the Association and myself as president received last July,”

“But these stones continue to tell the truth to all those who pass.”

The theft, believed to be an anti-semitic attack, comes as a new EU study reports a rise in attacks against Jews.

Rome mayor Virginia Raggi said on Twitter that the theft was “unacceptable. A gesture that I condemn with force and deep indignation. Memory demands respect.”

The artist behind the project, Cologne-born Gunter Demning, wanted to give back a name to the victims who had been reduced to a number, returning them symbolically to the home and neighbourhood that was snatched from them.

They are called Stumble Stones, Stolpersteine in German, because the idea is that you literally stumble over the slightly raised cobbles, and are forced to remember.

Demning says that stooping down to read the details is a kind of bow of respect to the victims.