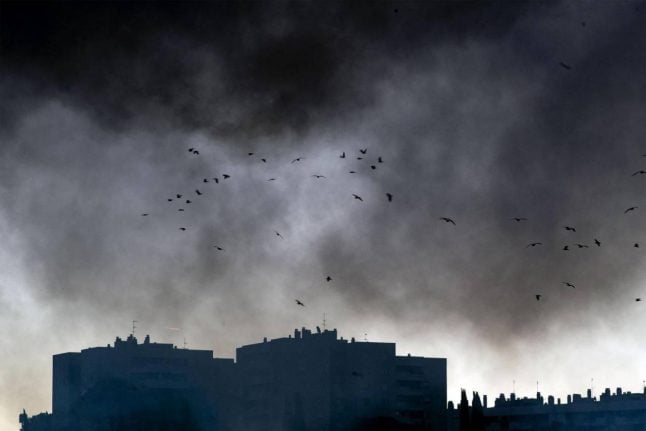 Twelve teams of firefighters are battling to put out a vast fire at a rubbish dump in Rome as fears grow of a garbage ‘crisis’ in the capital.

The odour of burning refuse wafted across the historic centre as the blaze, which began overnight, crept steadily from the site in the north-east of the city.

The fire broke out at the TMB waste processing plant, which officials say has been completely consumed by the flames.

A high column of thick smoke, thought to be toxic, can be seen overhead.

Smoke has spread across the north-east of the capital towards the centre, where the acrid burning smell has also been reported.

“The TMB plant is completely compromised. It's obvious that the smoke is toxic, because it burns trash, oil and plastic, but firefighters have reassured us that it is heading into uninhabited areas, so we are not alarmed at the moment,” said president of Rome’s Municipio III, Giovanni Caudo.

However he advised local residents to keep windows closed, and said children and people with respiratory problems should stay indoors “as a precaution.”

Residents have been taking to Twitter to demand updates, and are questioning authorities' claims to have the fire under control as acrid smoke spreads further across the city.

As well as the health hazard posed by the smoke, residents are also concerned about what the loss of the essential waste processing facility will mean for Rome's rubbish problem.

“We are waiting to see what the firefighters will determine caused the fire. What is certain is that this was not an unexpected or unforeseen disaster,” said Natale Di Cola, from Italy's biggest trade union CGIL.

The environment minister warned back in January that Italy could be sanctioned by the European Union unless authorities in Rome and the Lazio region tackle the burgeoning waste disposal crisis.

The company in charge of collecting Rome's waste, Ama, has long been accused of failing to keep mounds of rubbish from overspilling onto the streets.

Thousands of protesters rallied in Rome in October over the capital's decrepit infrastructure, blaming mayor Virginia Raggi for the garbage woes as well as other issues..

“We have been denouncing the security risks – and fire risks in particular – for years, saying only the garbage that can be treated should be taken there, rather than it being stocked up,” Di Cola said.

“From tomorrow, we will be in even hotter water. The site is out of action and Rome will be even more in crisis,” he added.