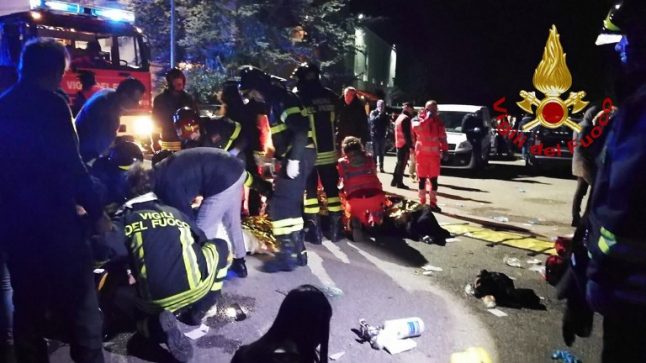 Emergency services attempt to help the victims of a nightclub stampede in Corinaldo, near Ancona. Photo: Vigili del Fuoco/AFP

A 15-year-old boy has been arrested on suspicion of causing the stampede at a nightclub in the town of Corinaldo, near Ancona in central Italy, this weekend in which six people were killed.

Media reports said the suspected use of a pepper spray-like substance sparked panic during the concert.

“The cause may have been the dispersal of a stinging substance, the young people fled and trampled over each other. Sadly, six people died and dozens are injured,” the fire service said in a statement on Twitter.

As the crowd panicked, people ran for the three emergency exits, one of which led to a small bridge and the car park, according to a preliminary investigation.

The force of the fleeing crowd made a railing collapse and dozens of people fell, crushing those below to death.

Ancona Chief Prosecutor Monica Garulli said seven others are also under investigation: four owners of the venue and three businesspeople who ran it.

Investigators are also looking into whether the club sold more tickets to the event than the venue could hold.

Three witnesses said that the suspect, who has not been named by police, had released pepper spray. Another witness reportedly claimed that the spray was used to disable a person and steal their gold chain.

Police have not ruled out that the fumes came from another source, noting that a large number of clubbers suffered ill effects. However, a can of pepper spray was found in the club.

Gangs have used pepper spray to steal from people at public events in Italy about 20 times in the past two years.

In June last year one person was killed and 1,526 injured when a gang using pepper spray caused panic among crowds watching a football match on a large screen in Turin.

33 students from a school in Pavia were taken to hospital yesterday, local media reports, after pepper spray or a similar substance was used, and another five were hospitalised in Cremona when a 14-year-old girl sprayed classmates in the gym’s changing room.