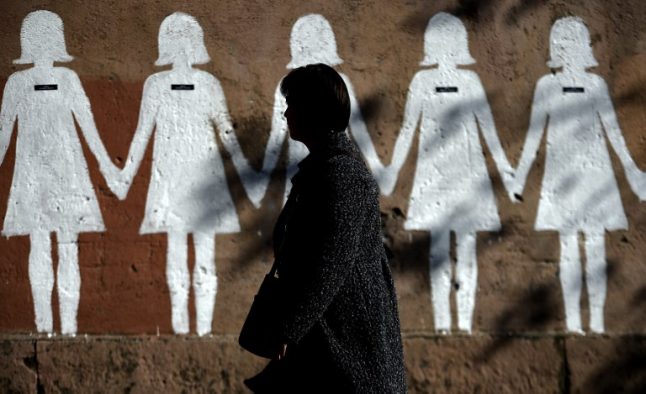 Photos of the high-powered meetings published by Repubblica show a sea of ties, with rows of male politicians and male business leaders on either side of the table.

The difficult task of spotting the females among them is like playing a depressing version of Where’s Wally. At first glance there seem to be none.

At the first meeting, called by Labour Minister Luigi Di Maio, there were no women present on the government’s side and only two women among the 36 heads of industry.

At a second meeting called by Interior Minister Matteo Salvini, the picture was almost the same except – spot the difference – there was only one woman in the room this time.

The pictures sum up the sad state of gender equality in Italian politics, business, and society.

Just 17 percent of the current government is female. There are five female ministers in the cabinet of 18, and only 14 percent of Italian mayors are women.

The number of female prime ministers or presidents in Italy past or present, meanwhile, is a big fat zero. And these pitiful figures are not an improvement.

The previous government was 31 percent female, meaning that this administration has taken a big step backwards.

And a study last year showed a decline in the number of women taking top roles in Italian government, as well as a drop in wage equality, with figures from before this government took office.

But few of them, it seems, are in real positions of power. Only seven out of 100 Italian companies have a female head – although that is a threefold increase since 2013, when female Italian company directors were almost unheard of.

Many Italian women say that pursuing a demanding, high-powered career is just not a realistic option.

With little support available, many face a choice between career and family

Donatella Prampolini, vice president of Confcommercio and one of the two women present as Di Maio's meeting, told Repubblica that too often women give up their careers before reaching the top.

“We're still surprised to see women at the top,” she says, “We still need exceptional personal situations to get there; for example I could count on my husband and parents to raise my three children. Without them, I would not have been at that table.”

“It’s an unacceptable situation,” she says, and blames “the lack of services, the lack of welfare, and the dominant culture” in Italy.

Successive governments have failed to prioritise these issues, and the current government doesn't seem to be changing that trend.

Instead, a bill proposed by conservative senator Simone Pillon, of the right-wing League, risks turning the clock back 50 years for women, children and survivors of domestic abuse, as it aims to change the rules on the separation of couples and the custody of children. Meanwhile, policy providing affordable childcare and shared parental leave has been sidelined, meaning many young Italian women are either putting careers on hold to have children, or putting off starting a family because they just can’t afford it.

And pressure from society plays no small part in the decisions women make.

Sophia is a 31-year-old business graduate living in Siena who just had her first child. “Everyone in my family just expected me to give up my job when I found out I was pregnant,” she tells me.

“And it was clear that my husband wasn’t going to give up his. No one expected him to stop working. Besides, he makes more money and has a higher position in his company,” she explains.

As Italy’s birth rate plummets, the government has launched misguided policies such as that of offering people a free piece of farmland for having a third child, though the root cause of the problem has not been tackled.

Sophia says she thought she’d “probably get made redundant anyway” once her boss found out she was pregnant.

Her claim is not really as shocking as it sounds; among those in work, one in four Italian women loses her job within a year of giving birth, according to Istat – and the risk increases with each child.

Unlike some other European countries, Italy doesn't have comprehensive child benefit schemes.

Only 40 percent of Italy's workforce is female, one of the lowest rates of any developed country in the world.

Women have more equality in Mexico, Kazakhstan, Zimbabwe or Bangladesh than in Italy, according to the World Economic Forum's 2017 report on the global gender gap.

Out of 144 countries, Italy ranks 82nd for equal opportunities at work and in politics, education and health.

Italy lags far behind its Northern European neighbours, who lead the index globally.

In a society with such deep and widespread gender inequality, the lack of women – and lack of interest in issues holding them back – at the top of government comes as no surprise. It's a self-perpetuating system, and it needs to be interrupted