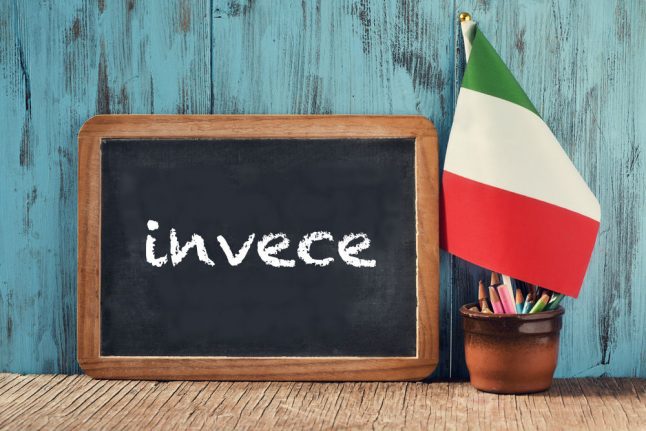 Even if you've only just started learning Italian, the chances are you will have encountered the word ma ('but') by now.

But (!) there's more than one way to contradict yourself or others, especially in Italian. Today's word is a commonly used alternative: invece (pronounced 'in-vetch-eh').

In its simplest sense, it too means 'but'.

Pensavo che fosse partita, invece era ancora lì.
I thought she had gone, but she was still there.

Invece can mean a few more things. Followed by di, it means 'instead of'…

Invece di lamentarti, datti da fare!
Instead of complaining, get on with it!

… while adding che turns it into 'rather than'.

Preferirei lavorare in Italia invece che in Francia.
I'd prefer to work in Italy rather than in France.

Invece also functions as 'on the contrary' or 'on the other hand', used to contrast two ideas or subjects.

Ti ho rimproverato per molte tue azioni: per questa invece ti lodo.
I've reproached you for many of your actions; for this one, on the contrary, I applaud you.

Io preferisco i romanzi, Simona invece i film.
I like novels, Simona on the other hand likes films.

It's very common to hear invece used this last way in spoken Italian: at a restaurant, for instance, a waiter might take one person's order then turn to the rest of the group and ask: “E voi, invece?” ('And as for you?')

There's one more use we seem to come across, and that is: e invece… Think of it as saying 'and yet…' and trailing off.

Mi avevi detto che mi amavi. E che saresti rimasto con me. E invece…
You told me that you loved me, and that you'd stay with me. And yet…

It serves to show – usually somewhat pointedly – that whatever you've just described wasn't quite how things turned out.