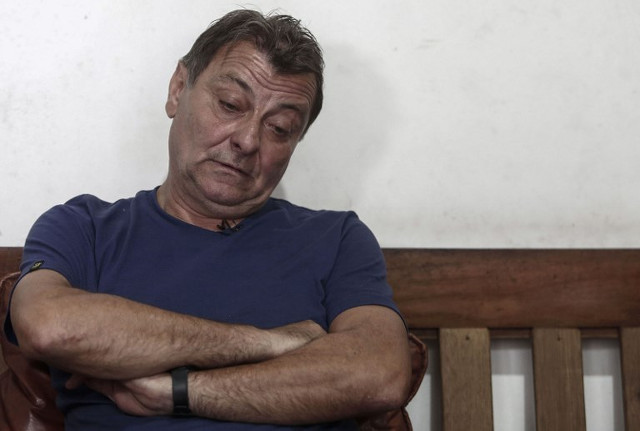 Italian ex-militant Cesare Battisti during an interview with AFP last year. Photo: Miguel Schincariol/AFP
“The president has signed the extradition of Cesare Battisti,” an official in the presidency confirmed to AFP.
Battisti — who has been in Brazil for years, most recently living in Sao Paulo state under a 2010 protective decree issued by former president Luiz Inacio Lula da Silva — has not been located since the Supreme Court judge on
Thursday issued his arrest order.
Brazil's incoming far-right president Jair Bolsonaro had promised to extradite Battisti after he takes over from Temer on January 1.
READ ALSO: Brazil orders arrest of Cesare Battisti, former far-left militant wanted in Italy
Lula, meanwhile, is in prison serving a 12-year term for corruption. Italy has repeatedly sought the extradition of Battisti, 63. Its justice and interior ministers earlier Friday tweeted that they will be satisfied to have Battisti face “justice” in Italy.
Igor San'Anna Tamasauskas, Battisti's lawyer, told AFP just before Temer signed the extradition order that an appeal had been lodged with the Supreme Court against the arrest order. He said he did not know where his client was.
READ ALSO: Brazil orders deportation of Italian extremist
Battisti escaped from an Italian prison after being convicted in 1979 of belonging to an outlawed leftist group, the Armed Proletarians for Communism.
He was subsequently convicted in absentia of having killed two members of Italy's police forces, taking part in the murder of a butcher, and helping plan the slaying of a jeweller who died in a shoot-out which left his 14-year-old son in a wheelchair.
Battisti admitted to being part of the group but denied responsibility for any deaths.
He reinvented himself as an author and in 2004 skipped bail in France, where he had taken refuge. He went to live clandestinely in Brazil until he was arrested in 2007 in Rio de Janeiro.
After four years in custody, Lula issued his decree — later upheld by Brazil's Supreme Court — refusing Battisti's extradition to Italy, and he was freed, angering Italy.
Battisti, who has a five-year-old Brazilian son, last year told AFP he faced “torture” and death if he were ever to be sent back to Italy.
Url copied to clipboard!