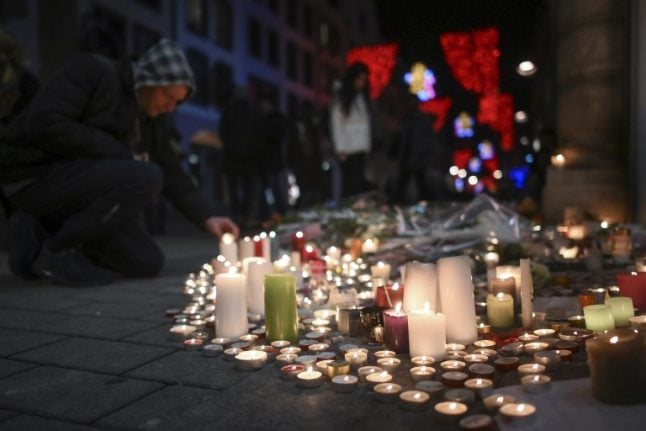 Tributes to the victims of the Christmas market attack in Strasbourg. Photo: Sebastien Bozon/AFP

“Once more blind and absurd violence has cut off a young life, struck at the heart of a family forever, and stunned a community,” said the archbishop of Trento, Lauro Tisi.

“Part of heaven came down to the earth and now it's returning to it,” he said.

Megalizzi's body, draped for the funeral in both Italian and European flags, returned to Italy from France two days ago. He and a colleague, Polish national Barto Pedro Orent-Niedzielski, died in hospital of their injuries over the weekend.

Megalizzi, a radio journalist who was in Strasbourg to report on the latest session of the European Parliament, spent three days in a coma after being hit in the head in the shooting last Tuesday.

Today in my hometown in #Trento we remember #AntonioMegalizzi, killed in the #strasbourgshooting last week while he was reporting on the EU Parliament for @europhonica. Non ti dimenticheremo Antonio, che la terra ti sia lieve pic.twitter.com/0XzGKwV0pk

Trento paid tribute to him with a projection of his image onto buildings in the city's main square, with the title “Antonio the European”. Meanwhile the local university radio station was running a 48-hour marathon of Megalizzi's reporting.

Across Italy, flags flew at half-mast on Thursday outside all public buildings.

In total five people were killed in the Strasbourg attack and a dozen others injured.

French police later shot dead the gunman responsible, 29-year-old French national Cherif Chekatt, who is believed to have been radicalized by Islamist extremists.