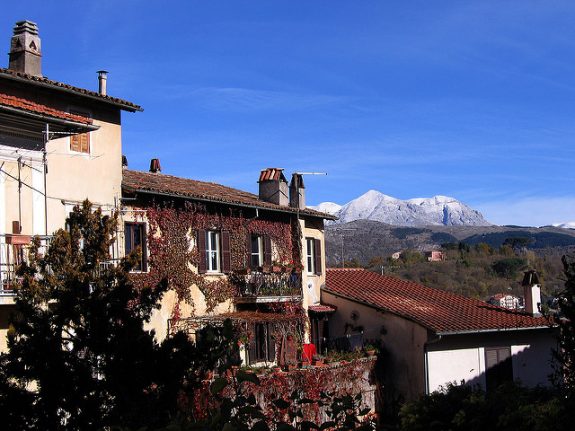 Tagliacozzo, a small Abruzzan mountain town in the province of L'Aquila, is built into a crevice that cuts Mount Civita in two. Needless to say, it’s pretty breathtaking. Plus, it's reachable in just less than an hour from Rome.

It has a pretty impressive history. In ancient times, it was populated by the Marsi, an Italic people famed for their strength and picked to be gladiators in Rome. And not only. It’s a wild area of natural beauty and habitat of the unique Marsican brown bears.

Its traditions are guarded by its inhabitants and apparent in every feast through the year, including, of course, at Christmas. At Christmas, it’s the eel that’s the star of the culinary show, and Christmas Eve is when the most important meal takes place. Eel for sale in at a seafood market. Photo: DepositPhotos

I spoke to a couple of Tagliacozzo’s residents to find out more. Anna Sacomini, 61, tells me: “At one time the eels would be brought to the market live in aluminium baskets. You’d choose your eel and then take it home, kill it and cook it in a tomato sauce with spaghetti. The capitone, a larger female eel – the females generally grow larger – was cooked on a spit above an open fire and then eaten as a main course. Other dishes included fried cod in batter or cooked with potatoes in tomato sauce.”

Silvia Mazzelli, 49, adds: “I’ll always remember the eel roasting on the spit at my grandfather’s. My grandmother also used to make cod and chickpea soup. We’d have anchovies, the usual fried food, fried cod, cauliflower and apples. Winter was just after the oil had been made and it was also the time when people killed their pig so they also had lard for frying.”

She also tells me about the tradition of the Christmas log. “On Christmas Eve the head of the family chose a log he’d put aside from the stock of wood, generally oak or beech as that’s what’s around here. About four o’clock this log would be lit in the fireplace and would burn all night until it burnt right down, the idea being that its heat would keep baby Jesus warm. It couldn’t be covered. People would sit and wait to go to midnight mass around the fire. They’d play cards, tell stories – various tales or about their families.” “The eldest witch, or the woman who was most witch-like, was chosen to pass on her secrets to the youngest witch,” says Mazzelli. “The custom’s been lost now but it’s linked to the fact that here in Marsica we’ve always been a magical people. There’s a sanctuary at Luco dei Marsi dedicated to the priestess Angitia, who was also a priestess of snakes. It’s good magic, all to do with the supernatural. These things have always been important.”

Angitia is a pre-Christian goddess who was venerated by the Marsi people and associated above all with the cult of snakes. One of three sorceress sisters, she possessed deep knowledge of healing magic and supposedly had the power to cure snake bites. The Marsi people were famous in Rome not just as fighters but also as magicians and healers for their knowledges of herbs, poisons and antidotes. In fact, the snake makes its appearance in a particular sweet from Tagliacozzo, based on dried fruit gathered several months earlier. The lot is bound together with dried figs, cocoa, grated chocolate, orange rind and a sprinkling of black pepper, and sweetened with honey and wine that has been cooked down and reduced.

“There are no strict amounts,” Silvia tells me. “Each family has its own recipe.” When it’s ready this is all rolled up in a sheet of pasta – “the same as if you were making fettuccine” – and turned in on itself, as if it were a snake twisted in on itself.

READ ALSO: The most mouthwatering Christmas cakes from around Italy

Is the eel linked to the snake? Silvia seems to think it could be. In any case, it was eaten because of the tradition of abstaining from meat and preferring fish on Christmas Eve. “We’re far from the sea here. We eat eels because they live in freshwater. And the snake is the ancient symbol of fertility, and of rebirth.”

It’s an intoxicating mixture of Christianity, folklore and magic that draws you in, a place which speaks its tales of stunning landscapes, amazing food, ancient goddesses, witches and magic.

What other reasons do you need to visit Tagliacozzo? The town also has wonderful forni – literally 'ovens', figuratively bakeries – where you can feed a family of four for just over €10. Try Triske along Via Guglielmo Marconi for pizza rossa and pane di polenta, or Presutti on Via Lungo Imele.

La Parigina takes its name from a beautiful and fascinating Parisian woman who lived here after World War II. It’s both a bed and breakfast and osteria in a beautifully restored fizzy drinks and ice factory next to the old mill and is just five minutes' walk from the central piazza.

Casale Le Crete is an eco-friendly bed and breakfast just 5km out of Tagliacozzo amidst vineyards and nature. Owner Luca Gianotti is a walking expert and professional walking guide.

If you fancy a day on the pistes, go to Ovindoli – where Pope John Paul II used to go skiing – or Campo Felice. Both offer serious skiing and are about 45 minutes' drive from Tagliacozzo.