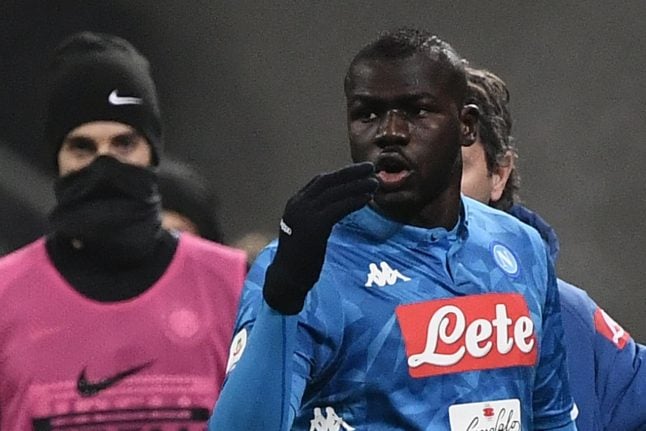 Napoli's French-born Koulibaly was targeted by monkey noises and racist chants at the San Siro, before being sent off for sarcastically applauding referee Paolo Mazzoleni.

Three announcements were made over the loudspeaker imploring fans to stop the chants, but they continued.

According to UEFA's protocol, the match should have been suspended then but instead the game was allowed to continue.

In a joint statement UEFA and players' union FIFPro said they were “very concerned by this unacceptable racist incident and by what appears on the surface to be a failure to respect the widely-recognised three-step anti-racism protocol.

“Koulibaly was subject to racist chanting and, despite announcements made by the stadium speaker, the chants did not stop. Moreover, it seems that Napoli's coaching staff had already informed the referee several times of racist chants.”

“Both organisations are of the opinion that the racist chants towards Koulibaly, who had to leave the pitch after receiving a second yellow card, are unacceptable and have no place in football.

“FIFPro and UEFA support the Italian football authorities on any additional measure that will be taken to tackle racism in stadia for which FIFPro and UEFA have a zero-tolerance policy.”

Both organisations welcomed that Inter Milan would have to play two Serie A home matches behind closed doors and another game with their North Stand closed.

Napoli coach Carlo Ancelotti said after the game his players would walk off the pitch next time.

But Italian Football Federation chief Gabriele Gravina insisted referee Mazzoleni officiated correctly in the game which Inter won 1-0 thanks to a late goal when Napoli were down to nine men.

“If players left the field then it would break the rules, followed by a negative result for their team.

“Let's not forget that there are rules, which need to be improved. If not then it would be like the Wild West.”