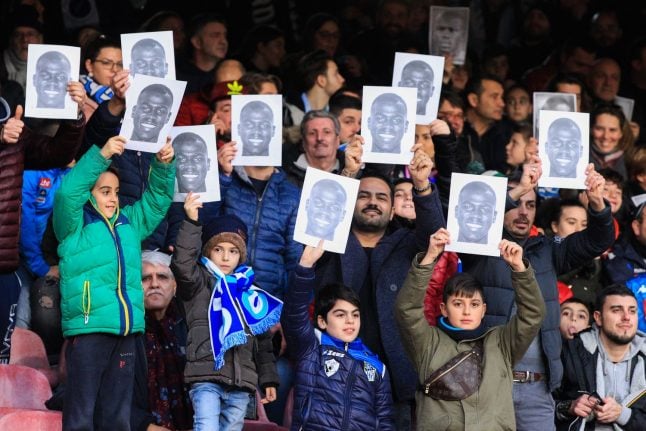 Posters with the message “Siamo Tutti Koulibaly” (“We are all Koulibaly”) were visible throughout the Stadio San Paolo during the game which the hosts won 3-2.

Napoli's French-born player Koulibaly was targeted by monkey noises and racist chants at the San Siro on Wednesday, before being sent off for sarcastically applauding the referee.

Serie A returned to action three days after the violent clashes in Milan during which an Inter supporter died after being hit by a car.

And fans showed their solidarity with Koulibaly, wearing masks with the player's face, as well as t-shirts bearing his name.

The home fans also displayed a banner on front of the stadium, “We are all Koulibaly: no to racism!,” with fliers in the stadium “Koulibaly big brother” or “We're with you Kalidou”.

Among them a very young fan held up a poster with: “I'm small, but a man like Koulibaly”.

On the pitch, Napoli's Algerian defender Faouzi Ghoulam wore Koulibaly's number 26 shirt in warm-up with the Senegalese player suspended after his sending off on Wednesday.

European football governing body UEFA said that the correct anti-racism protocol had not been followed during the midweek game.

And Napoli coach Carlo Ancelotti said Saturday they would have been in favour of the match being suspended temporarily.

“There was a bit of confusion after Milan, we never asked for the suspension, but three times a temporary interruption.

“UEFA confirmed that we are right, it surprises me that the president of the referees federation disagrees.

“I hope it will never happen again or we will walk off the pitch.”

Ancelotti added: “50,000 people calling Koulibaly's name is quite a show, there has been a good feeling throughout the city.

“Kalidou is very popular, he has had messages from many sportsmen and it is a sign that it is not so difficult to improve things.”

Meanwhile, there were also banners before Saturday's match between Parma and Roma in memory of 39-year-old Inter Milan supporter Daniele Belardinelli, who was killed during the pre-match clashes.

“Ciao Dede” and “an ultra never dies, Daniele with us” were two of the banners remembering Belardinelli who had been banned from the San Siro between 2007 and 2017 for violence.