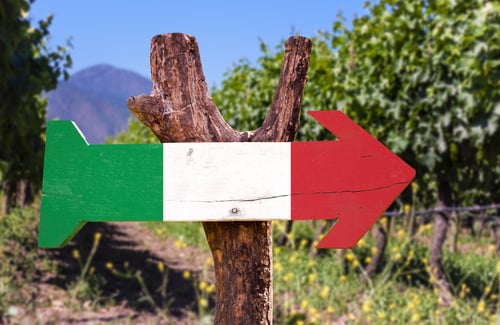 Where to next? Photo: Depositphotos

We’ve been hearing about how Italy’s famous landmarks have been suffering under the strain of overtourism lately. As well as crowds being a nightmare for residents, it doesn’t exactly make for the most enjoyable travel experience for visitors either. After all, it’s hard to enjoy the view when you’re being poked in the eye by someone’s selfie stick.

But that doesn’t mean you shouldn’t keep visiting. While Italy’s hotspots are famous for good reason, there’s so much more to see beyond the usual tour routes.

And this year there are some exciting goings -on that put less predictable towns and regions into the spotlight.

So here’s our expert roundup of 2019’s top ten most exciting travel destinations in Italy – plus one that isn't really in Italy – from northern wine country to the idyllic beaches of the south. In the top spot is the third-oldest city in the world, Matera. The capital of the Basilicata region, with its unique cave houses, bears such a striking resemblance to Old Jerusalem that 25 movies have been filmed there so far, including The Passion of the Christ in 2003.

And this is the year to visit, as Matera is about to celebrate its year as European Capital of Culture, beginning on January 19, 2019 with a full programme of events, and right now you can catch a Salvador Dali exhibition with his sculptures set in contrast to the ancient surroundings.

It might not be a truly “off the beaten path” destination but it sure is hard to get to. It’s a long drive from pretty much any well-known city or tourist destination, and over an hour’s journey from Bari, the nearest airport, though a long-awaited new motorway between the two is nearing completion.

Tourist numbers have exploded over the last few years, but that hasn't yet diminished its atmosphere or charm. Outside of peak season it's not crowded and accommodation is reasonably priced – unless you choose to splash out at one of the city's many luxury cave hotels, of course. The town of Vinci. Photo: Depositphotos

This year marks 500 years since the death of Leonardo da Vinci and his birthplace, a small town in Tuscany, is putting on a programme of exhibitions and events throughout the year.

In the lush green hills of Montalbano, the small town set amid vineyards has barely changed in appearance since the time of its most famous son. And many of its sights, such as the Museo Leonardino, are connected with his life. It's the picture-postcard Tuscan town, and makes the perfect trip once you've seen Tuscany's most famous sights, or even if you've never been before. Lonely Planet named Piedmont as its best region to visit in 2019, ahead of the Catskill Mountains in the US, northern Peru, Australia's Red Centre or the Scottish Highlands, describing it as “the savvy, arty, foodie traveller's secret”. And we couldn’t agree more.

Food and wine lovers will be in heaven anywhere in the region, but I loved the small town of Biella in northern Piemonte. Not just another atmospheric small town, it really stands out thanks to its proud food tradition and acclaimed restaurants like Matteo Caffe e Cucina.

And while Barolo-producing areas like the Langhe are well known, this area has its own wines, like Gattinara, best tasted at the Travaglini winery, that we think are every bit as interesting.

READ ALSO: 'In Piedmont, both the food and the people are outstanding'

The elegant Piedmont city is worthy of its own mention. It should be more famous for its hazelnut chocolate, beautiful views of the Alps, one of the largest collections of Egyptian artefacts outside of Cairo, and world-class cinema museum in the Mole Antonelliana.

We can’t understand why Turin isn’t packed with tourists, but we recommend visiting before that changes. Plus, 2019 marks the 50th anniversary of the film The Italian Job, and Turin is where many of the car chase sequences were filmed. Pesaro seen from the nearby countryside. Photo: Depositphotos

The whole region of Le Marche is worth looking into if you’re hoping to visit a stunningly beautiful area that people outside of Italy know very little about. Bordering Tuscany and Umbria to the West and South West, the Marche region is scenic and unspoilt by mass tourism.

The area of Pesaro and Urbino is especially beautiful, with its wide, rolling landscapes. It has everything from the relaxed beaches around Pesaro itself to the coastal natural park of Monte San Bartolo, the vineyard-covered hills and the outstandingly atmospheric Gradara Castle, which is more like a walled village with pretty bars and restaurants within.

Le Marche might not stay such a well-kept secret for long, because in the next few years it will be in the spotlight for its artistic heritage.

This year the region will be honouring one of Italy’s most famous poets, Giacomo Leopardi. His home town, Recanati, will mark the 200 years since he wrote his famous poem L’infinito with exhibitions and special tours.

2020 will mark 500 years since Raphael’s death, and celebrations of the master and his work begin in 2019 with the exhibition 'Raphael and his friends from Urbino'. Yes, I’m really telling you to visit an active volcano. Some potential visitors may have been put off by the recent eruption of Mount Etna in Sicily, and the following series of small earthquakes nearby. But for adventurous travellers it’s a dream come true.

Etna is the most active volcano in Europe and since its latest eruption at the end of December, those visiting the area have been able to witness the dramatic spectacle of lava and smoke coming from the snow-covered volcano.

This rare and impressive sight can be seen across many parts of the island, from the Etna National Park to many of the island’s beaches. You definitely won’t find a more exciting destination in Europe. Italy’s lakes are glamorous, but they’re also crowded and expensive to visit in summer. One alternative is to combine a visit to this smaller lake with a trip around the lesser-travelled Umbria region. Tuscany’s southern neighbour Umbria is half as famous but has the same rolling landscapes. And this lake. You can catch a taxi boat or hitch a ride with locals to Isola Maggiore, an enchanting little island full of handmade art and wild birds.

Nearby there’s the  enchanting lakeside village of Passignano sul Trasimeno with lake views over the medieval rooftops, the small Renaissance town of Città di Castello on the banks of the Tiber, and the art and architecture of Umbria’s most stylish town, Perugia. The port of Monopoli. Photo: Depositphotos

Puglia has been touted as the next big Italian holiday destination for years now and it lives up to the hype. This flat, rural region is covered in olive trees and surrounded by coastline on three sides, and in the south you’ll find the kind of white sands and clear waters that could rival the most far-flung exotic island.

It’s a long region and if you don’t fancy driving all the way south, the area around Monopoli is fascinating too. The city’s whitewashed buildings, port and history make it well worth seeing and it’s one of few places in undeveloped Puglia with both beaches and a busy commercial centre.

READ ALSO: Ten percent of the world's best beaches are in Italy

The rocky Adriatic coastline here is made up of cale, tiny coves, some with sandy beaches, where locals come to swim and sunbathe.

Some are just rocky outcrops while others have cafes and car parking, but each has a unique character or feature. At Cala Ghiacciolo (Ice Lolly Cove), for example, mysteriously cold waters are still icy enough to take your breath away in mid-August – but the heat and crowds mean I would visit in June or September. Travellers are seeking out Italy’s smaller, lesser-known islands this year and this tiny four-island archipelago, long the preserve of domestic travellers, is slowly becoming known further afield. Mostly unspoilt, these are the only Italian islands in the Adriatic and they also form part of the Gargano National Park.

Open water swimming and snorkelling are popular around the islands, which are famous for their clear waters and abundance of marine life, and they also boast incredible rock formations, gorges and caves. Not exactly a top-secret, up and coming destination, we know. But if you’ve always wanted to visit Pompeii, now’s the time to plan a trip. The site, once badly deteriorating, has been given a new lease of life by restorations and improved security patrol, and the once-collapsed House of Gladiators has been reopened to the public after careful renovations (tours are available on Thursdays only).

There have been more fascinating discoveries than we can count in the past year, and authorities are encouraging people to get off the usual route and explore lesser-visited parts of the site. Just avoid visiting in the middle of summer, when the heat and crowds become unbearable.

It might not technically be in Italy, but it’s surrounded by the peninsula. We feel like Europe’s least visited country should get more love.

As far as we can tell, the dramatically-located mountaintop capital of this tiny country doesn’t go unvisited for a lack of sights – it has not one but three stunning castles perched precariously on rocky outcrops, offering unbelievable views – but the problem is more likely the fact that you need a car to get there. If you can make the trip, it’s completely worthwhile.