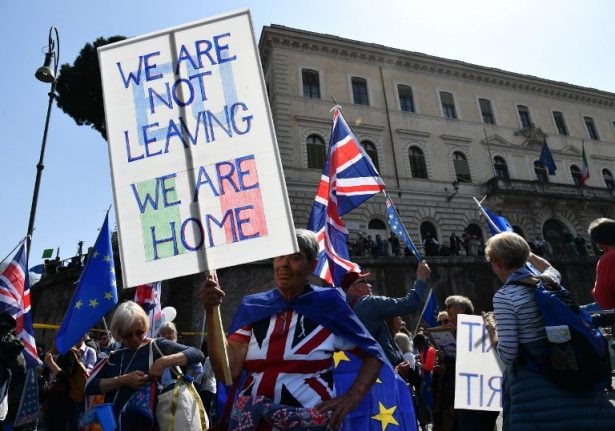 The Italian prime minister's office said that Rome would continue to work with other EU members “to limit the negative consequences of Brexit, and in particular, to guarantee the rights of Italian citizens in the United Kingdom and British citizens in Italy, the stability of the markets, banking, insurance and financial sectors, and a withdrawal that is as orderly as possible in all other respects to protect citizens and businesses”.

“In this context,” the statement continued, “preparations for all scenarios will continue and intensify, including for the undesirable scenario of a withdrawal without an agreement on March 29th, 2019.”

READ THE LATEST: Brits in EU demand to be spared from Brexit 'train crash' after May's deal rejected “We are in the theatre of the absurd,” a former senior EU Commission official told The Local.

“What comes next is unclear. The UK must on any reckoning be closer to a no-deal exit than it was before. Article 50 states that the UK will leave on March 29th, deal or no deal. Unless of course Parliament votes to revoke Article 50 – which seems to be excluded in political terms.”

The vote left Brits in Italy facing fresh uncertainty about their future here.

“Following the largest defeat of any government in over 100 years, Theresa May said only that EU citizens in the UK and British nationals in the EU deserve clarity as to their future and their rights. But she singularly failed to offer any plan as to how to achieve that,” said British in Italy, a group that campaigns for citizens' rights.

“Our citizens' rights that have already been negotiated and agreed between the UK and EU could so easily be ring-fenced. Theresa May has offered nothing – not even an extension to the Article 50 period in order to discuss such a proposition with Europe.” The Italian government has promised that British nationals legally resident in Italy will not lose their rights to live and work here when the UK withdraws from the EU just over 70 days from now, whether there is a deal by then or not. Without an agreement, though, Brits will need to apply for permanent residency to guarantee their long-term future in Italy, in a procedure that has not yet been defined.

A no-deal Brexit would also have consequences for Italian industry, which warned of serious economic fall-out.

“No deal would be a very negative scenario for Italian businesses,” commented Lisa Ferrarini, head of the Ferrarini food export group and vice-president of Italy's business association Confindustria. “Our exports to the UK are worth around €20 billion a year. Many sectors would be hit, including mechanics, food production, logistics and transport.”

“No deal would reimpose bureaucracy and customs tariffs, with great difficulties for exports and the movement of people,” Ferrarini said. “Not to mention legislation different from the EU's, which would mean obstacles, tariffs or otherwise.”

The same fears extend to the hundreds of thousands of Italians who live and work in the UK. London, which has enough Italy-born residents to make it the fifth biggest Italian city after Roma, Milan, Turin and Naples, has long been the destination of choice for young Italians seeking opportunities – but no more, one recent study indicates.

Recruitment site Indeed found that number of searches for jobs in the UK from people based in Italy dropped by 13 percent between 2015-18, while over the same period, searches by UK-based users for work in Italy climbed by 16 percent. Whether those came from Italians looking to return or Brits hoping to flee is unclear.