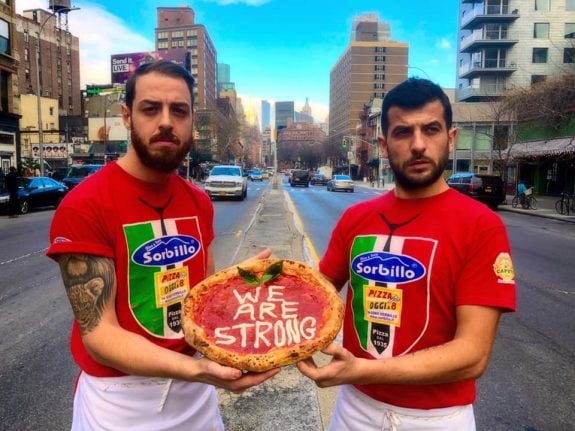 Italian pizza chefs at Sorbillo Pizzeria in New York send a message to their friends in Naples. Photo: Pizzeria Sorbillo

No one was injured by the late-night explosion, which happened when the restaurant was closed, but it damaged the restaurant's entrance on the city’s busy Via dei Tribunali.

Today he receiving phone calls and messages of support from across the world, with locals, customers, fellow restaurateurs, and famous Italian faces taking to social media to express their anger at the attack.

High profile Naples-born writer Roberto Saviano, author of Gomorra, wrote: “Gino Sorbillo tells the truth, in Naples the majority is made up of extraordinary people, and he is undoubtedly one of these. Come on, Gino.” Local tour guide Michelle from Taste Guide Naples posted photos of a sign posted on the restaurant door saying chi tocca la pizza tocca tutta Napoli, or “whoever messes with our pizza, messes with Naples,” writing on Facebook that “Naples still has a worldwide bad reputation, even though it is totally unfounded nowadays.”

“I always try to show people that Naples is a cultured city full of friendly, welcoming people and that there's nothing to worry about in the centre. I still stand by those words, but it pains me to say that sometimes the minority ruins it for the rest of us.”

“Fortunately, Naples is now showing its best side in expressing sympathy and solidarity.”

The bombing came seven years after the pizzeria suffered a devastating fire, rumoured to have been set by local mafiosi, either as some kind of statement or as a warning that the business needs to pay protection money.

However, Sorbillo told La Gazetta dello Sport that he “can’t exclude” the possibility that football hooligans are to blame, describing a backlash after recently taking a stand against incidents of racism and violence involving hardcore “ultra” football fans.

“A few weeks ago I stood against racism and violence in football and many people took the opportunity to attack me,” he said. “Maybe it's an episode connected to that.” Police are examining CCTV footage after cameras on the busy street captured images of the attacker, a young man, placing the bomb in front of the restaurant before running away.

Deputy Prime Minister Matteo Salvini said he’ll be visiting Naples in the aftermath of the bombing.

He took the opportunity to promote his security decree, which he and the mayor of Naples have been in a bitter dispute over after the mayor refused to enforce parts of the bill and called it “unconstitutional.”

Meanwhile, Sorbillo said that his restaurant would be serving pizzas again “within a few days” and that he would be celebrating World Pizza Day, or La Giornata Mondiale della Pizza, today. Sorbillo's pizzeria has become a tourist attraction in itself, drawing visitors from far and wide after winning accolades for making some of Italy's best pizza.

It's one of the attractions to have brought tourists into the working-class neighbourhoods of Naples, which has long been dogged by organised crime and poverty.

After the success of his original location, Sorbillo has since opened other venues in Naples, Milan and New York.

“It hurts me that it hits those who strive to improve this city; it’s an attack that worsens Naples, and which worsens the world, just as if they put it in Piccadilly Circus in London,” he said. “But they will not stop me.”