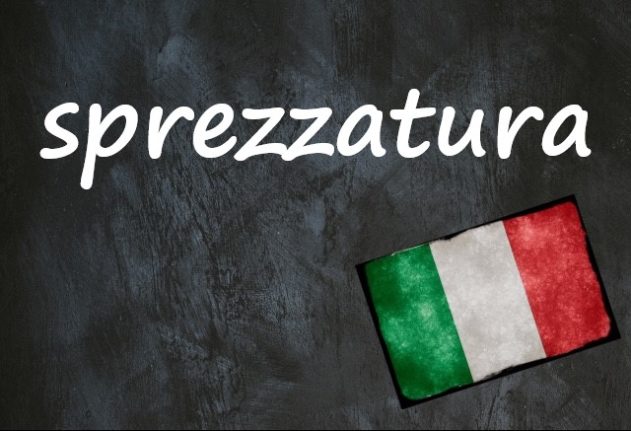 Photo: Annie Spratt/Unsplash/Nicolas Raymond
Sprezzatura is one of those untranslatable words that is uniquely Italian. It’s also fun to say.

It was a term that became fashionable back in the sixteenth century, after Renaissance-era writer Baldassare Castiglione used it in his 1528 Book of the Courtier to describe “a certain nonchalance, so as to conceal all art and make whatever one does or says appear to be without effort and almost without any thought.”

Basically, then, sprezzatura is what it takes to make something difficult look effortless.

There aren’t many courtiers around these days to show us what that looks like, but Italy is full of more modern examples.

It’s the effortlessly glamorous Italian woman spotted on an evening passaggiata, where la bella figura is everything – but would never admit how much work she puts into her appearance.

It’s the impossibly good-looking man I saw in Naples strutting catwalk-style across a piazza, designer sunglasses on, well-tailored suit jacket slung over his shoulder, and a tiny coffee cup held in one hand. He showed no sign of having noticed that he held the full attention of every woman on that square.

It’s that charming party host who never breaks a sweat and shrugs off their restaurant-style cooking as “just an old family recipe”.

– Sprezzatura is the art which conceals art.

– It takes a lot of sprezzatura to do his job

The untranslatable word has apparently been adopted into English and appears in the Oxford English Dictionary, defined there as “studied carelessness.”

Though since some Italians don’t even know what it means, or at least find it hard to define, we doubt it’s used widely outside of the country.

And we’re not saying it’s always a positive attribute.

After all, the root of the word is in the verb sprezzare, meaning to ‘disdain’ or ‘scorn’.

Some writers have described sprezzatura as a kind of aloof detachment, or even “the art of acting deviously,” saying those courtiers back in Baldessare’s day were in danger of losing their true selves to the need to keep up this façade at all times.

It can also be used to describe a kind of trickery or performance:

– The magician showed a lot of sprezzatura, as he performed his act with ease.

Is it nonchalance, grace, or just trickery? Perhaps a little bit of all three.