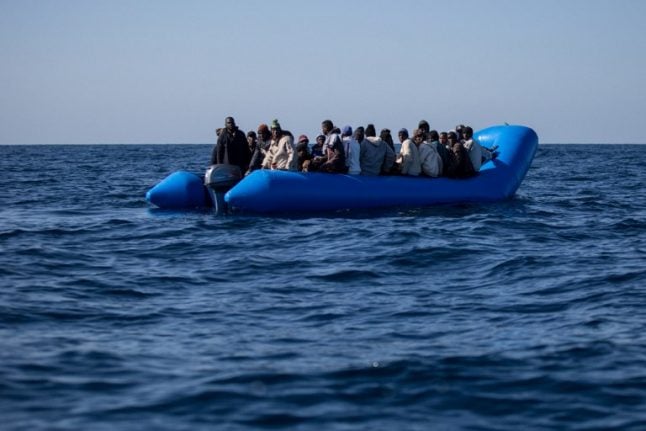 An inflatable boat with 47 migrants on board is pictured while being rescued by the Dutch-flagged Sea Watch 3 off Libya's coasts on January 19th. Photo: FEDERICO SCOPPA / AFP
“These young people have already suffered enough violence and abuse during their journey to Italy and are particularly vulnerable,” Raffaela Milano, director of the Italian arm of Save the Children, said in a statement.
She called for an “immediate” response to the call by Catania prosecutors to allow the minors on board the Dutch-flagged rescue ship Sea Watch 3, currently sheltering from bad weather off Sicily, to be disembarked.
The International Organization for Migration (IOM) said there were 13 unaccompanied minors, and the situation was “critical”. But far-right Interior Minister Matteo Salvini repeated his refusal to take in the migrants, saying the minors were nearly 18 years old and not children.
“I will not change my mind. Italy's ports are closed and will remain closed to people traffickers and their accomplices,” he said.
Salvini has insisted Germany or the Netherlands take responsibility for the 47 mainly sub-Saharan African migrants, who were rescued off Libya by the German NGO Sea Watch a week ago.
“Dutch ship and German NGO? Amsterdam or Berlin are waiting for you,” he said.
Dutch Migration Minister Mark Harbers said his country “was not obligated” to find a solution, telling Italy's Corriere della Sera daily that the Sea Watch 3 had acted “of its own initiative”.
“It is up to the captain to find a safe port for the 47 migrants he saved,” he said in the interview, adding that the Dutch government would “not participate in an ad hoc solution”.
'Every minute counts'
“For three days we have faced storms, strong winds and heavy rain,” a doctor on board told ANSA news agency.
the migrants “are wet because there is not enough room under cover. They have no room to rest,” she said, adding that many of them had scars from violence inflicted on them in Libya.
The mayor of Syracuse, Francesco Italia, has said he would welcome those rescued and some inhabitants in the Sicilian coastal city on Saturday hung white sheets from their balconies, with the message “let them disembark”. Dozens of residents gathered for a sit-in on the beach, where the ship could be seen a mile out.
“Let us offer a welcome and a smile to those who, so near, are still too far off,” a joint statement signed by local associations and trade unions read.   Milano warned that “every extra minute spent on the ship… is likely to leave indelible marks that these youngsters will carry with them for the rest of their lives.
“Lives and human dignity can never be a price to be paid on the chessboard of international politics,” she said.
Migrants rescued by ships have frequently been left in limbo since Italy's anti-immigration government began turning them away last summer.
Since coming to power last year, Italy has been demanding greater solidarity from reluctant fellow EU states. But EU members have failed to agree on a permanent mechanism to relocate migrants who reach Europe's shores, even though arrivals have dropped sharply since a peak more than three years ago.
By AFP's Ella Ide