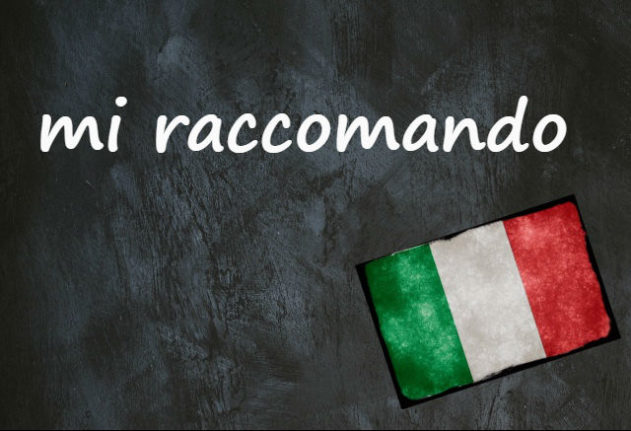 Our reader Pierre Kattar suggested that we feature today’s phrase, mi raccomando, which he says he first heard from his former mother-in-law as he prepared to take her daughter on a date.

“I didn’t know what it meant then but it sounded like a warning!,” he tells us. “I took it as: ‘You better treat her right, or else.'”

We don’t know his ex-mother-in-law, but we’d bet that’s probably a fair translation. Though it’s not the only one: as we’ll explain, mi raccomando is usually more of a request than a threat.

Raccomando – sounds a lot like ‘recommend’, right? So you’d be forgiven for thinking that the direct translation is ‘I recommend that…’ or, as our reader interpreted it, ‘you’d better…’.

Actually, in this case it’s a false friend. Yes, there is an Italian verb raccomandare that means ‘to recommend’, and yes, you can use it to give someone advice.

Ti raccomando questo libro.
You should read this book (or: I recommend this book to you).

But take a closer look at those two examples: the personal pronoun (ti – ‘you’) and the subject of the verb (raccomando – ‘I recommend’) don’t match. They involve two different people, you and me, because I’m giving you a suggestion.

Yet in the phrase mi raccomando, both pronoun and verb refer to one person alone – me. That’s because it’s actually the reflexive form of the verb: raccomandarsi, which means ‘to beg’ or ‘to implore’.

Si è raccomandato di fare presto.
He begged us to do it quickly.

Or, as a mother-in-law might say to her daughter’s suitor:

Mi raccomando: non perdere di vista mia figlia.
I beg of you, don’t let my daughter out of your sight.

While it sounds a bit theatrical in English, in Italian the phrase isn’t nearly so formal: it’s just a way of stressing that what you’re asking is important, a bit like we might start a request with ‘now remember…’ or ‘don’t forget…’.

Mi raccomando, scrivimi!
Don’t forget to write to me!

So if you hear someone tell you “Mi raccomando…”, there’s no need to panic.

This is the one and only time we’ll say this, but just do as Silvio Berlusconi advises and ‘make sure you behave’.

Do you have a favourite Italian word, phrase or expression you’d like us to feature? If so, please email us with your suggestion.