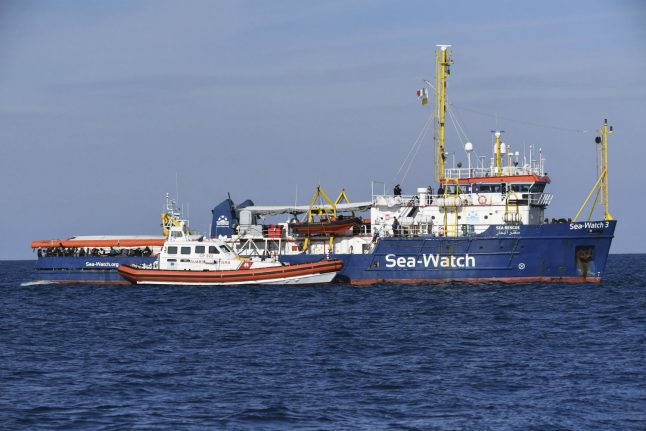 A Sea Watch 3 ship off the coast of Syracus, Italy on Sunday. Photo: DPA

The German NGO's spokesman Ruben Neugebauer said the group had taken the drastic step on Friday because of Rome's hardline attitude against the mainly sub-Saharan migrants that its ship Sea Watch 3 pulled out of the Mediterranean on January 19th.

Italy's Interior Minster Matteo Salvini is “taking the people on board as
political hostages”, said Neugebauer.

“They are trying to push it to the Netherlands,” he added, referring to
Salvini's insistence that the Netherlands or Germany take responsibility for the migrants.

Sea Watch 3 is sailing under the Dutch flag and currently sheltering from
bad weather off Sicily.

Neugebauer stressed that laws governing international waters are clear that ships in distress “must be brought to the nearest safe harbour”.

Migrants rescued by ships have frequently been left in limbo since Italy's
anti-immigration government began turning them away last summer.

In a similar case earlier this month, the EU struck a deal to share out
between eight European countries nearly 50 migrants stranded aboard two ships, one of which was Sea Watch 3.

Salvini, who has warned that he was considering legal action against Sea
Watch's crew, said Tuesday that the 47 migrants can disembark if they agree to leave for Germany or the Netherlands.

“Disembarking of migrants? Only if they head for the Netherlands, whose
flag the Sea Watch boat is flying, or to Germany, the country of the NGO,” he said on Twitter.

“In Italy we have already received, and spent, too much.”

The Netherlands on Monday rebuffed Italy's call to take in the 47 migrants, arguing that Dutch-flagged ship had acted “on its own initiative”.

“It was up to the captain of Sea Watch 3 to find a nearby port to disembark the 47 migrants he had on board,” said the Dutch government.

Europe has been wrestling with the problem since the migration crisis of
2015 when more than one million people arrived on its shores, many of them fleeing conflict in the Middle East.