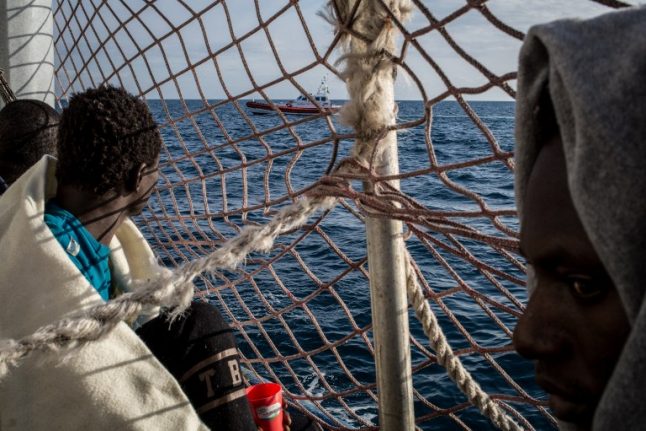 People aboard the Sea Watch 3, which is currently at rest off Sicily. Photo: Federico Scoppa/AFP

The Sea Watch 3 ship, run by a German NGO, rescued the mainly sub-Saharan African migrants off Libya more than a week ago and is currently sheltering from bad weather off Sicily. The Mediterranean nations of Italy and Malta have both refused to let the vessel dock.

“Without a firm idea of an overall solution, the Netherlands will not take part in ad hoc measures for disembarkation” of the ship, Lennart Wegewijs, a spokesman for the Dutch Justice and Security Ministry, told AFP. Italy's Interior Minister Matteo Salvini has insisted Germany or the Netherlands take responsibility for the migrants, warning that he was considering legal action against the crew. In a statement on Monday the Italian government reiterated its assertion that “the jurisdiction, in this specific case, belongs to the Netherlands because the ship that carried out the rescue in international waters is flying the flag of that country”.

The Dutch government said it was not its responsibility because the boat had acted “on its own initiative… It was up to the captain of Sea Watch 3 to find a nearby port to disembark the 47 migrants he had on board”.

German and Dutch authorities insist the problem should be solved within the wider context of an elusive EU migration deal that distinguishes between people in need of asylum, and economic migrants. EU rules task the country where migrants land with responsibility for dealing with asylum claims.

“How is it possible that 47 people can pose such a threat to the entire European Union?” Red Cross President Francesco Rocca asked in a statement. “Saving lives must be the priority of all governments.” People protested in central Rome on Monday night over the treatment of the Sea Watch migrants. Photo: Andreas Solaro/AFP

Italy's official but independent authority for the protection of detainee rights decried the migrant's “illegal detention” since they were not allowed to disembark in Italy. The group said in a statement that Italy's action amounted to “depriving the rescued migrants of their freedom”.

In early January the EU reached a deal to share out migrants on board two ships, one of which was Sea Watch 3, between eight European countries. Migrants rescued by ships have frequently been left in limbo since Italy's anti-immigration government began turning them away last summer.

Some 113,482 migrants crossed the Mediterranean to reach Europe last year, according to the UN refugee agency, which said 2,262 people lost their lives or went missing making the perilous journey. Europe has been wrestling with the issue since the migration crisis of 2015 when more than one million people arrived on its shores, many of them fleeing conflict in the Middle East.