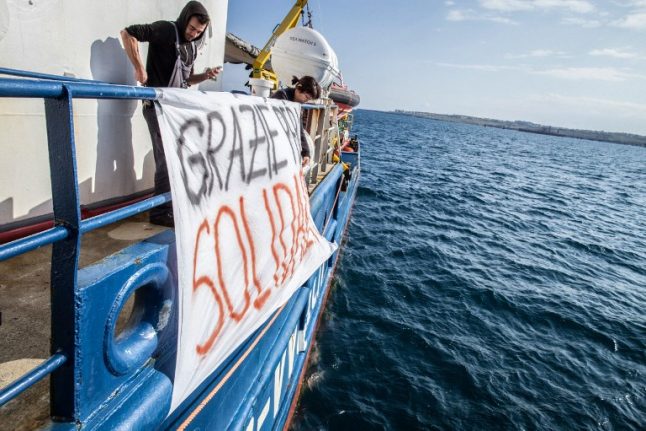 People onboard the Sea Watch 3 hand a banner saying: 'Thank you for the solidarity'. Photo: Federico Scoppa/AFP

France, Germany, Malta, Portugal, Romania and Luxembourg have all now offered to accept some of the migrants who have been stuck on the Sea Watch 3 vessel since January 19th.

“Luxembourg has joined the list of friendly countries that responded to our invitation [to take the migrants], now we are seven countries,” Conte told journalists.

“Disembarking will begin in the coming hours.”

? The hostage situation seems to be over! After 10 days of loitering at sea, finally our guests might reach a safe haven. #EUrope should be ashamed. Human rights must not be conditional to negotiations of the @EU_Commission, what we need is a sustainable solution. #OpenThePorts pic.twitter.com/MUm7Qn75Xm

The fate of the migrants has been at the centre of a standoff between Italy's Deputy Prime Minister Matteo Salvini — who has closed the ports to migrants and demanded Europe take its share — and the German NGO Sea Watch.

The aid group on Friday filed an urgent case at the European Human Rights Court against Italy for refusing to allow its ship to dock and the mainly sub-Saharan migrants, including 15 minors, to disembark. Rescuers say they include youngsters bearing the scars of violence suffered in crisis-hit Libya.

Salvini, who has warned that he was considering legal action against Sea Watch's crew, refused to be drawn on how many of them Italy would be taking in.

“Once we know with certainty what the others will do, then I'll say what we will do,” he said.

He has accused the ship of sailing straight for Italy rather than taking the migrants to closer ports in Libya or Tunisia, but the NGO says it tried but failed to get a response from Tripoli or Tunis. One of the minors rescued by the Sea Watch 3. Photo: Federico Scoppa/AFP

Sea Watch 3 is sailing under a Dutch flag and currently sheltering from bad weather off Sicily after pulling the migrants to safety as they attempted the treacherous Mediterranean crossing.

The Strasbourg-based European Court of Human Rights (ECHR) on Tuesday urged the Italian government to “take all necessary measures, as quickly as possible”, to provide migrants on board the Sea Watch 3 with medical care, water and food.

People in the Sicilian city of Syracuse, less than a mile from where the Sea Watch is stalled offshore, have offered assistance as the ship waits.

Mayor Francesco Italia boarded the vessel for a visit and warned that conditions were worsening, including for the children onboard. Meanwhile a group of hotel and B&B owners in Syracuse offered to take in all 47 migrants and help integrate them at their own cost, from sending them to Italian lessons to giving them jobs.

“A huge thank you. Please keep it up,” the ship's captain, Kim Heaton-Heather, said in a video message.

“In the end, humanity won,” said member of parliament Stefania Prestigiacomo from the centre-right Forza Italia party, who had boarded the ship this week as part of a delegation supporting the migrants, in defiance of a direct order from Salvini.

“The loser is the Italian government, which pathetically begged for someone to take in fewer than 50 people, while keeping them hostage at sea,” she said.

People rescued at sea have frequently been left in limbo since Italy's anti-immigration government came to power in July. In a similar case earlier this month, the EU struck a deal to share out between eight European countries nearly 50 migrants stranded aboard two ships, one of which was Sea Watch 3.

READ ALSO: Italy to take in some of Sea Watch migrants as part of international deal Europe has been wrestling with divisions over how to handle the problem since the migration crisis of 2015, when more than one million people arrived on its shores, many of them fleeing conflict in the Middle East.

The Netherlands rebuffed Italy's call to take in the 47 migrants, arguing that Dutch-flagged ship had acted “on its own initiative”.

French President Emmanuel Macron on Tuesday called for the need for “humane solutions” for migrant rescue operations and urged that migrants be allowed to disembark at the nearest port, in this case “in Italy”. He said sharing of the care of migrants came after, and that France was committed to that principal.