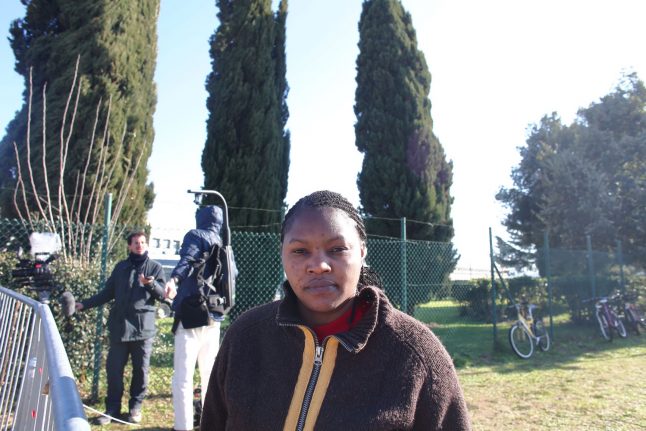 On January 20, Francesca Maurizi learned via a Facebook post that she was being fired. Italy’s Interior Ministry had announced it was shutting down the asylum reception centre where she worked as a psychologist in the Roman town of Castelnuovo di Porto with near-immediate effect.

The majority of its 535 residents would start being relocated to other centres across the country within 48 hours. The centre would be permanently closed, and most of its 120 staff out of a job, by the end of the month.

“Driving to work this morning I heard on the radio that the ministry had said that on the 31st the centre will close. So on February 1 I won’t have a job any more,” Maurizi told reporters from the national daily La Repubblica, her voice cracking with emotion. The staff weren’t the only ones floored by the announcement. Five of the families living in the centre had children enrolled at the local elementary school. Several of its occupants played for the local football team.
The centre briefly came under the international media spotlight when the pope washed the feet of some of its residents on Holy Thursday in May 2016, and in recent years it had been held up as a model of local integration.

“We’re not saying it didn’t need replacing with something better,” Castelnuovo di Porto mayor Riccardo Travaglini said in an interview on Sunday. “But to do it in this way, without any prior consultation, creates an unacceptable emergency.”

In the days that followed, the centre’s guests were transported by the coachload to other accommodation centres throughout the country in a process fraught with tension and uncertainty.

TV crews filmed scenes of tearful farewells between the evicted occupants and local residents. Minor scuffles broke out in the confusion.

Parliamentarian Rossella Muroni made headlines when she blocked the path of a coach with her body and refused to move until it retreated back inside the centre, protesting that none of its passengers had been informed of their destination.

When the fourth and final coach of the day pulled out of the compound’s heavily guarded gates on Saturday morning, just over 200 occupants remained, none of whom knew where they would be sleeping in six days’ time.

Among them was 30-year-old Kenyan political asylee Giulia Murengi, who has lived in the structure for the past 16 months.

“It’s hard to suddenly to have say goodbye to all your friends and not know when you’ll see them again,” she told The Local. Murengi said she would like to stay in Castelnuovo di Porto if possible. She’d been attending a terza media course (the equivalent of a middle school diploma) in the nearby town of Monterotondo since October, and studying the Catechism at the local Catholic church. But she was open to being transferred elsewhere.

“The important thing is to have food to eat and somewhere to sleep,” she reasoned stoically. As soon as the news of the structure’s closure was announced, Castelnuovo di Porto’s town council was inundated with offers from Italians across the country to host the displaced in their own homes.

A makeshift ‘taskforce’ comprised of town council members and the local health authority ASL-RM4 worked around the clock to place the families with young children with local residents so they will be able to see out the school year with their classmates.

The taskforce has also found temporary accommodation in private homes for the structure’s 16 remaining residents with humanitarian protection status, who no longer have an absolute right to shelter since Italian interior minister Matteo Salvini’s ‘Security Decree’ (widely known as the ‘Salvini Decree’) abolishing the low-grade protection was passed into law in November.

As of Tuesday, the team had drawn up provisional plans for a new project that will allow them to offer official accommodation to the displaced on a more long-term basis.

“It’s a work in progress, but we hope to get it off the ground in the next few months,” said coordinator Gabriella Cerretti, who works for the Rome-based NGO CISP (Comitato Internazionale per lo Sviluppo dei Popoli) which has managed the centre’s community integration projects for the past year.

But as the taskforce celebrated their successes, they also questioned why they’d had to scramble to fill the sudden void left by the state at such short notice, leaving them almost entirely dependent on the goodwill of private individuals.

“The interior minister didn’t need to close the centre in such a hurry, there’s no emergency,” says Cerretti. “I personally think this rush is because the European elections are coming up in May and Salvini promised in his electoral campaign that he would close all the reception centres.”

In addition to being Italy’s interior minister and deputy co-prime minister, Matteo Salvini is also the leader of the far-right anti-immigrant League party, which rules in coalition with the anti-establishment Five Star Movement (M5S). Since coming to power last spring, he has made clamping down on illegal immigration his rallying cry.

The minister’s pledges to clean up the country routinely lump ‘scafisti’ and ‘clandestini’ – words which translate as ‘traffickers’ and ‘illegal immigrants’ but are generally used by Salvini to refer to anyone who arrives in Italy without official papers – together with the mafia.

“In the way Salvini presents it, security and immigration is one issue, whereas in reality they are many: asylum-seeking and security are completely different things,” says Dr. Daniele Albertazzi, a senior lecturer in political science at the University of Birmingham.

“He says the centres are much too large, and it’s too easy for them to become hotbeds of drug dealing and other crimes. I don’t think it’s very important to him whether or not it’s true.”

Observers of Italian politics have been surprised by the degree to which Salvini has been allowed to drive the new government’s agenda. When the coalition formed in May 2018, the League party was the minority partner, with only 16% of the vote to M5S’s 35%.

But as interior minister, Salvini has been given free rein to implement his hardline anti-immigrant policies with almost no opposition from his M5S counterparts, and his strategies have proven popular. Since Italy’s general election in March of last year, his approval rating among Italians has soared to 60%.

“If you ask anyone on the street who is leading the government, they won’t say M5S, they’ll say Salvini,” says Dr. Albertazzi.

“M5S should have come into the government from day one with a strong alternative narrative. They didn’t, and now it’s too late.”

“They know it’s very dangerous to be framed by Salvini as bleeding heart liberals who want to help the migrants. They are trapped in this situation because I don’t think they feel they can move away without losing a lot of support.”

Despite Salvini’s bullishness on issues of immigration, there are signs his hardline tactics may be starting to backfire on him.

Last week an Italian court announced it intends to try Salvini on charges of ‘kidnapping’ for refusing to allow the migrant rescue ship Diciotti to land in Italy in August of last year, leaving its 117 passengers, most of whom were Eritrean political asylum seekers, stuck on board for 10 days.

Initially defiant in challenging prosecutors to do their worst, on Tuesday Salvini backtracked and published an open letter in the national newspaper Corriere della Sera saying he did not think it would be in the country’s best interests for him to be tried after all.

Those protesting the Castelnuovo di Porto closure want to send Salvini the message that he’s miscalculated on this as well.

“The closure of the structure will lead to a humanitarian and security emergency,” warned senator Vanna Iori of the centre-left Democratic Party. “If Salvini's aim is to create a societal time bomb, he is succeeding perfectly.”

“This is the effect of the security decree,” vented one angry laid-off employee who took part in a protest march last week. “Where’s [Salvini’s] phrase 'Italians First’? First for what? To be put out in the streets?”