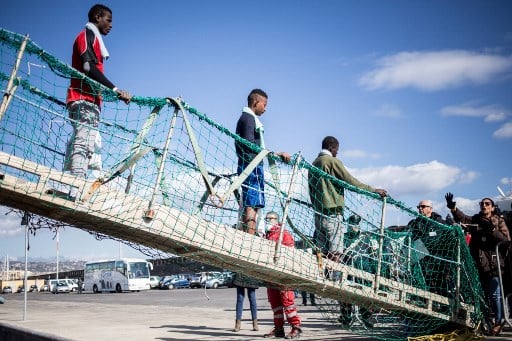 The Dutch-flagged Sea Watch 3, which had been waiting off the coast of Sicily carrying people it pulled to safety in the Mediterranean on January 19, was finally given permission to anchor in Catania after six other countries agreed to take the migrants in.

The exhausted migrants, including 15 minors, cheered and hugged the crew as the ship sailed into the harbour.

“I foresee that there may be problems with the authorities,” Sea Watch's mission head Kim Heaton-Heather told AFPTV.

“But I am also very, very certain that in the end, no matter what allegations are brought against the organisation, the ship or the crew as whole, none of these allegations will stick and the truth of the matter will come out,” he said.

France, Germany, Malta, Portugal, Romania and Luxembourg each said they would take in some of the mainly Sub-Saharan group.

It was not clear whether or not Italy would also host some of them. The ship had been sheltering from a storm off the coastal town of Syracuse, which had been ready to welcome those saved.

In previous days, Interior Minister Matteo Salvini had repeated his refrain that “Italian ports are closed” and threatened legal action against Sea Watch's crew, accusing them of sailing straight for Italy rather than taking the migrants to closer ports in Libya or Tunisia.

The German charity says it tried but failed to get a response from Tripoli or Tunis, and on Thursday launched an appeal for financial aid, tweeting an appeal for help with legal costs.

Siracusas prosecutor stated #SeaWatch has done nothing wrong, so we were ordered to Catania, with a hardliner as prosecutor. @UNHCR just made criminalization of rescue NGOs responsible for record death rate at sea. Help us with our legal costs! #united4med https://t.co/0w3aCSBBh1 pic.twitter.com/xEMGw6J2rA

People rescued at sea have frequently been left in limbo since Italy's anti-immigration government came to power in July, and on Wednesday Salvini said he was looking to ban all ships with rescued migrants from entering Italian waters.

The decision to send the ship to Catania raised red flags among migration and legal experts who said it might be impounded, as was the case with several rescue vessels previously in different Mediterranean ports.

Should that happen, it would take the last rescue charity ship operating in the central Mediterranean out of action.

The only charity run rescue vessel left would be the Mare Jonio – a surveillance boat which aims to spot migrants in distress but is not equipped to rescue them.

Catania prosecutor Carmelo Zuccaro has made a name for himself as a legal thorn in the side of the NGOs that rescue migrants at sea.

In March 2018 he impounded the Open Arms ship as part of an investigation into the crew for allegedly aiding illegal migrants by refusing to hand them over to the Libyan coastguard.

The ship was released after a month following a court ruling that Libya could not be considered a safe country because of a lack of safeguards for human rights, but the investigation continues.

Doctors Without Borders (MSF) and SOS Mediterranee said in December that the Aquarius ship would not sail again after “a relentless ongoing political, judicial and administrative campaign backed by several European states.”

The rescue vessel had been stuck in a French port for two months following the revocation of its registration.