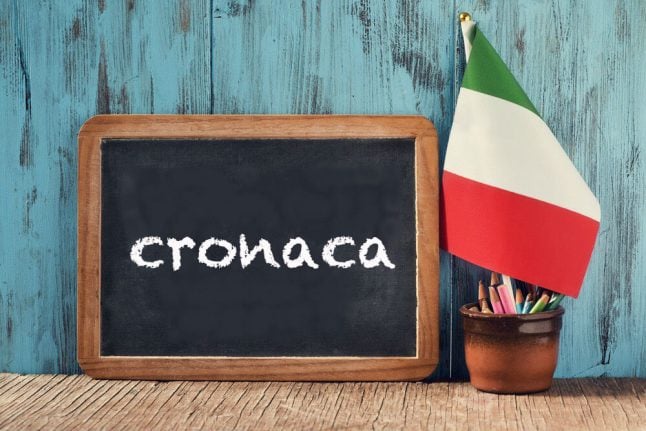 Cronaca is one of those Italian words that doesn't translate cleanly into English.

Without the help of The Local, you'd probably have to move to Italy and absorb its meaning through osmosis, as one-word dictionary definitions of 'news', 'narrative', or 'chronicle' don't really cover it.

Cronaca is a word you'll come across frequently in newspapers and on TV news channels, and is most often used to refer to stories about crimes ranging from murders and kidnappings to corruption and mafia activity.

If you look for it, you'll see that almost every Italian news site and newspaper has a section given over to cronache (the plural of cronaca).

A journalist who reports mainly on these sorts of stories can call themselves a cronista, which sounds much cooler than being an ordinary giornalista. A cronista working late into the night. Photo: stokkete/Depositphotos

But the uses of cronaca extend beyond crime stories.

News about deaths resulting from natural disasters or other accidents would also fall into this category.

During the Morandi bridge disaster last August, most news reports covering the tragedy were filed under cronaca.

An Italian friend studying for a journalism masters in Rome thought cronaca would best be translated as 'hard news', but it's not quite that either.

A report on Italy's negotiations with the EU over its latest budget proposals would be considered hard news, but it wouldn't typically count as a cronaca.

In the absence of a more scientific definition, I've come to think of a cronaca as a 'black tale' or 'dark news'.


How a cronaca looks in my imagination. Photo: OlenaKucher/Depositphotos

Any story which your grandparent would shake their head at and describe as a 'bad business' is probably a cronaca.

It essentially refers to any news that is fundamentally and objectively bad or is about bad actors.

Sometimes to highlight that the story is particularly dark it's called a cronaca nera, appending the Italian word for black, which really does translate (approximately) as a 'black story'.

If that all seems too dark for a cold winter's day, a more lighthearted spin on the word is available.

A cronaca rosa (literally 'a pink tale' or 'pink news') is gossip or tabloid news.

When you surreptitiously google your favourite celebrity while waiting for the bus, you'll probably end up reading a cronaca rosa.

So there it is. The next time you browse your favourite Italian news site, keep an eye out for a cronaca.