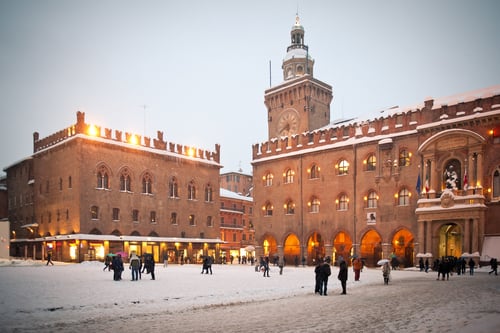 The north of Italy is expected to experience heavy snowfall in Valle d'Aosta, Piedmont, northern Veneto, the Ligurian hinterland, Lombardy, Trento, and Bolzano, while rainstorms that may be accompanied by hail and strong winds are forecast for central-eastern Liguria, Tuscany, Lazio, central-southern Veneto, Friuli Venezia Giulia, and Campania.

School closures have been announced for the Piedmont towns of Asti, Cuneo, and Alessandria and some of the surrounding municipalities, and in the Lombardian city of Como.

Students hoping for a snow day in Bologna were not so lucky, as the city council published a tongue-in-cheek Instagram post on Thursday evening informing them that classes would go on as normal.

“Which of us has never dreamed of school having to be closed because of the snow?” the message read.

“Nevertheless, it’s just bit of snow, as happens every winter in a northern city like Bologna. So, best to study a bit and go to bed. All the schools will be open tomorrow. Goodnight!”

Weather conditions across the peninsula are expected to start improving by Sunday.