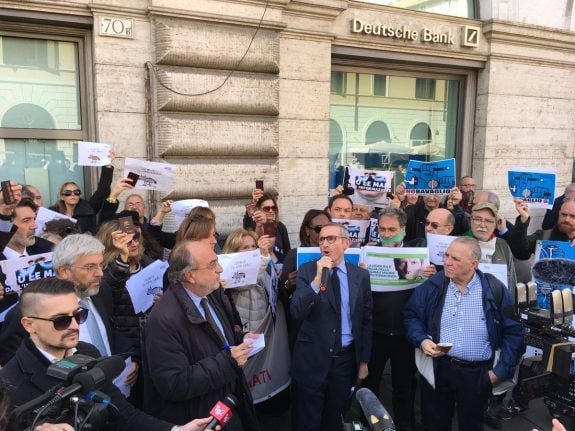 The report from the Council of Europe's Platform for the Protection of Journalism and Safety of Journalists said Italy ranked as the EU member state with the highest number of active threats last year.

Globally, it said Italy was among the countries with the highest number of alerts posted on the Platform in 2018 – the same as Russia, and more than three times the number registered in 2017.

It added that the Italian authorities have not responded to any of the alerts since June 2017, and blamed hostile rhetoric from government ministers for the increased threat level.

“The growing violence against journalists in Italy is particularly worrying,” the report said.

It singled out Deputy Premiers Luigi Di Maio, the M5S chief, and Matteo Salvini, the League leader, for criticism. It said they “regularly express through social media rhetoric particularly hostile to the media and journalists.”

The report said most of the alerts were recorded after the coalition government took office in June 2018.

It said journalists’ unions complained of a “constant risk of violence fuelled by the hostile rhetoric of members of the government and the ruling coalition parties.”

It said the Platform recorded three cases of journalists facing death threats in 2018, while 21 reporters threatened by the mafia live under permanent police protection.

“Among other things, Deputy Prime Minister Salvini has threatened to remove police protection for investigative journalist Roberto Saviano, despite the known threats to his life from criminal organisations,” the report said.

Last month two journalists from L’Espresso newspaper were assaulted by far-right extremists in Rome, and a notorious mobster was convicted last June of assaulting a journalist who’d asked him questions.

The report also pointed out that Di Maio has initiated a policy of abolition of public funding to local newspapers.

The two deputy prime ministers also caused an outcry when they nominated conspiracy theorist Marcello Foa as the new director of national broadcaster Rai. He was later appointed to the post by committee.

Foa, a longtime ally of Salvini, is also known to be a supporter of Russian President Vladimir Putin. He has publicly supported anti-vaccine theories, retweeted neo-fascists on Twitter and claimed that NGOs are operating an “immigration factory”.