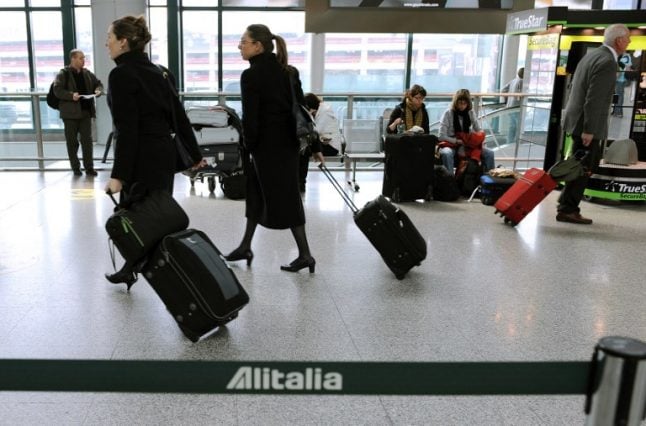 Don't despair: you can get assistance and compensation for cancelled flights in Italy and across the EU. Photo: Andreas Solaro/AFP

-EU legislation protects the rights of air passengers, and in many cases means that you're entitled for compensation in the event of delays, strikes, and more. But the majority of travellers aren't aware of their rights, so here are the answers to the questions you might have.

How do I know if my flight is covered?

If you receive benefits for the same journey under the law of a non-EU country, you are not entitled to claim for benefits under EU law.

And if the delay was due to “extraordinary circumstances”, you will not be able to claim compensation. Which airline operated my flight?

This is important, because for journeys from non-EU countries to EU countries, you are only covered if the operating airline is based in the EU. Sometimes, the airline you book your ticket with is not actually the airline that operated the flight.

READ ALSO: Before and after Brexit: How will the rights of Brits in Italy change?

The name of the operating airline should be on your ticket and booking details, or you can contact the airline or company with which you booked your flight to find out.

What compensation am I entitled to if my flight is delayed?

In the case of delays of three hours or more, you are entitled to compensation.

To calculate the delay, you measure the time difference between the scheduled arrival time and the actual arrival time. This means that even if your departure time was over an hour later than scheduled, the flight may not be considered delayed if the pilot was able to make up the time during the journey. If you can, speak to customer services at the airport as soon as you're affected. Photo: Alberto Pizzoli/AFP

For delays of more than three hours on journeys of up to 1,500 kilometres (equivalent to the distance between Rome and London or Milan and Athens), you are entitled to compensation of €250.

For delays of more than three hours, either more than 1,500 kilometres within the EU or between 1,500-3,500 kilometres travelling to or from a non-EU country, you are entitled to €400 compensation.

And for all other flights covered by the EU legislation, i.e. flights to or from a non-EU country of over 3,500 kilometres, you are entitled to €300 if the delay is under four hours and €600 for delays of four hours or more.

However, if you were re-booked onto another flight, this compensation may be halved.

Am I entitled to any other benefits?

Yes! For delays of over two hours (in this case, this refers to departure time), the airline is responsible for informing you of your rights and offering assistance.

This means that you should be offered free food and drink (usually in the form of a voucher you can spend at the airport) and the opportunity to make two phone calls for free, if the delay meets any of the following criteria:

The food and drink you are offered should be in proportion to the length and timing of the delay, so a mid-morning delay will usually result in a smaller amount of compensation or food than an evening or overnight delay.

For overnight delays, the airline must also provide you with accommodation and transport to and from the airport. Airlines cannot refuse to provide this assistance; if it isn't offered at the time, simply keep your receipts and a record of what you needed to spend, and make a claim for a refund when you get home. However, it must be proportionate, which means a hotel of a similar standard to the one you stayed in during your trip (or as close to the same standard as is possible). You can also claim for other damages, such as lost income if the delay meant missing a day of work, and in that case you should supply a note from your employer.

FOR MEMBERS: Why Italy's new security decree could be a headache for foreign drivers

And if your flight is scheduled to arrive at least five hours late to the final destination, the airline must offer you the chance to rebook or reschedule your journey; you no longer need to take the flight. If you choose not to take the delayed flight, the airline must refund you for the flight (including other parts of the same booking if you're now unable to use them, such as onward or return flights), and if you are part-way through your journey, they must refund your flight back to your original airport. If you do choose to take the flight, the above compensation applies.

What you aren't entitled to is any special compensation for emotional distress, discomfort or other non-material convenience linked to the delay. If you have to wait a long time, the airline is required to provide you with refreshments. Photo: Andreas Solaro/AFP

What if my flight is cancelled?

If your flight is cancelled, you have the right to either a refund or rebooking, and the airline must always offer you the choice. That means that if you no longer want to travel, for example if you've missed the event you were travelling for, the airline cannot deny you a refund and rebook your flight instead.

If you choose not to fly, the airline must give you a full refund, including for any other flights in the same booking that you now can't use, such as onward or return flights, as well as for a flight back to your original airport if you're part-way through a journey.

If you still want to fly, you have a legal right to be rebooked onto a replacement flight.

FOR MEMBERS: How to beat bureaucracy in Italy: the essential pieces of Italian paperwork

If the cancellation delays you more than two hours, for example if you are rebooked onto a flight four hours later, you have the same right to assistance such as food and drink as if the original flight had been delayed (see above).

And if the replacement flight means you arrive two or more days later than planned, or if the airline informed you of the cancellation less than 14 days before the planned departure, you are also entitled to compensation. This ranges from €125 to €600, depending on when you were informed of the cancellation, the length of the delay, and the distance of the flight.

Are there any exceptions?

Unfortunately, yes. The rules about compensation do not apply if the delay or cancellation is due to “extraordinary circumstances”, defined as events that couldn't have been avoided even if the airline took all reasonable measures.

Exactly what this includes can vary, but it usually applies in the case of political instability that affects flights, unforeseen safety risks, extreme weather events, and occasionally strikes. They are judged on a case-by-case basis. It's the airline that needs to prove that the circumstances were unavoidable, and if you think they are wrong in their decision, you can escalate the dispute. If you travelled free or at a reduced price not publicly available, for example if you work for an airline and benefit from staff discounts, you aren't entitled to compensation either. If you paid for the flight using a loyalty programme, you should still be able to claim compensation.

If the extraordinary circumstances apply to your flight, you are not entitled to compensation from the airline but may still be covered by any travel insurance policy you have (often included as an add-on to home insurance policies). It's therefore worth getting in touch with your insurance provider to explain the situation.

You may also be able to claim a refund from your credit card company.

How do I make my application?

Contact the airline that operated the flight directly, in writing, and make sure you keep copies of all correspondence in case you need to dispute the decision later on.

The airline should have a form for you to do this on your website, and you'll need to give details including the scheduled and actual arrival times, the departure and arrival airports, and include copies of receipts for any expenses incurred as a result. You can also make the complaint using this form, which is valid in all EU countries, plus Norway, Iceland and Switzerland.

There are several online tools, including the European Consumer Centre's Flight Rights Calculator, which can help you work out what you're entitled to. There are also companies which will make the application on your behalf, however they will almost always take a percentage of the compensation, so it's worth making the claim yourself.

If you aren't satisfied with the airline's response, or if you don't receive a response within a reasonable time period, you can contact the national enforcement body in the country where you're making the complaint. In Italy, that's the National Civil Aviation Authority (ENAC), and if you're making the claim outside Italy you can find a full list of these bodies and their contact details here. They should assess your claim for free if the airline has failed or refused to respond.

How long do I have to apply?

In Italy you have up to two months to apply for compensation, but try to do it as soon as possible.

If the delay took place in a different EU country, you will be subject to that country's law. For example, Norway and Finland both have a three-year limit for making flight compensation claims, whereas in the UK the time limit is six years.

FOR MEMBERS: What Italy's new laws mean for your citizenship application