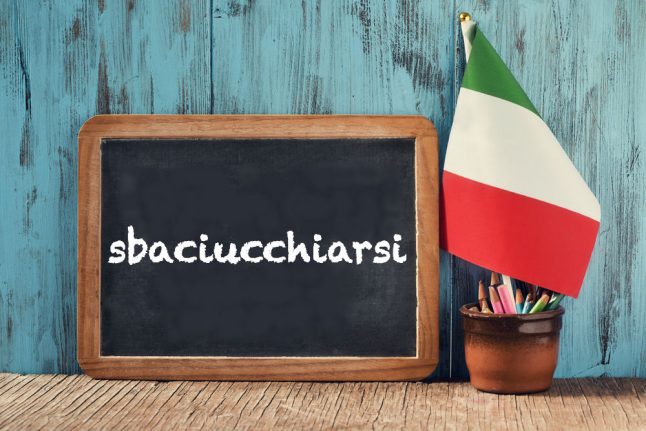 Here's a word to get your tongue in a twist, and hopefully someone else's too: sbaciucchiarsi (pronounced “sba-chiu-kiar-si”).

It means 'to kiss', but unlike the simplest way of saying that – baciare – it doesn't mean just once. There's a special variation, sbaciucchiare, to describe smothering someone in kisses. And while anyone can do that – for instance an overenthusiastic nonna – the reflexive form, sbaciucchiarsi, denotes that all those kisses are being returned.

It's therefore strictly for a romantic context, similar to the terms 'snog', 'smooch' or 'make out' in English.

Due giovani si sbaciucchiavano appassionatamente sotto l'albero.
Two youngsters were making out passionately under the tree.

There's also a noun in case you want to refer to 'snogging': sbaciucchiamento.

Ci sono stati altri sbaciucchiamenti in ufficio?
Was any other snogging going on in the office?

In fact, Italian has a wealth of words to talk about kissing, some romantic and some less so. There's slinguare – 'to kiss with tongues' – and, depending on your preferred technique, limonare ('to sloppy kiss' – literally, to kiss like a lemon squeezer) or pomiciare ('to kiss like you're grinding a pumice stone').

Some even claim that what we call 'French kissing' was invented by the Italians: baciare alla fiorentina ('to kiss the Florentine way'), a term dating back to at least the 17th century, means to kiss passionately with tongues.

However you do it and whoever you're doing it with, we wish you buon sbaciucchiamento ('happy smooching') and buon San Valentino ('happy Valentine's Day').

READ ALSO: How to talk about love, sex, and dating in Italian