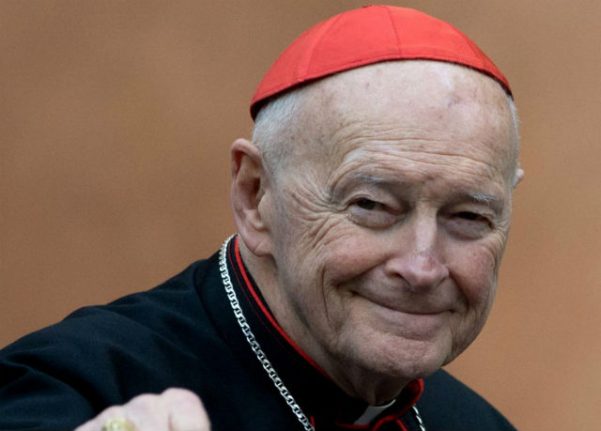 In a statement issues on Saturday, the Vatican said that it would ban American Theodore McCarrick from practicing as a priest after he was found guilty by a Vatican court of sexually abusing a teenager 50 years ago.

McCarrick, 88, who resigned from the Vatican's College of Cardinals in July, is the first cardinal ever to be defrocked for sex abuse.

He was found guilty in January by a Vatican court for sexually abusing a teenager, a decision confirmed by the pope in February, with “no further recourse”, according to the statement.

It said McCarrick was guilty of “sins against the Sixth Commandment with minors and with adults, with the aggravating factor of the abuse of power”.

The announcement marks a spectacular fall from grace for the once influential cardinal and comes ahead of a Vatican conference from February 21-24 bringing together bishops from around the world to discuss protecting children within the Church.

Sex abuse scandals around the globe, and most recently in the United States and Chile, have shaken the church, with Pope Francis promising a policy of “zero tolerance” even for high-ranking church members.

McCarrick, former archbishop emeritus of Washington, was barred from practising as a priest in July last year, after which he resigned his honorary title of cardinal. He currently lives in Kansas.

McCarrick was known for having sex with adult seminarians before he was accused of sexually abusing at least one teenager. Prosecutors in the US state of Pennsylvania last year found 300 priests were involved in child sexual abuse since the 1940s, crimes that were covered up by a string of bishops.

Prosecutors in half a dozen other US states have announced plans for similar investigations.

The pope accepted the resignations of several bishops in Chile last year after investigations revealed decades of sexual abuse by clergy in their dioceses.

In March 2015, Pope Francis allowed Keith O'Brien to keep the title of cardinal after the former Bishop of Edinburgh and former leader of the Catholic church in Scotland resigned over allegations of inappropriate sexual behaviour towards priests in the 1980s.

The only previous case of a cardinal resigning came in 1927, when Pope Pius XI accepted the resignation of French cardinal Lois Billot, who had himself renounced his status for political reasons.

McCarrick had been one of the most prominent American cardinals active on the international stage. Although officially retired, McCarrick had continued to travel abroad regularly, including on human rights issues.

The claims against him were made public in June by Cardinal Timothy Dolan, the current archbishop of New York. Dolan said an independent forensic agency “thoroughly investigated” the allegation.

A review board that included jurists, law enforcement experts, parents, psychologists, a priest and a religious sister then “found the allegations credible and substantiated” and the Vatican ordered McCarrick to stop exercising his ministry.

At the time, he released a statement maintaining his innocence but added that he “fully cooperated” in the investigation.

The US Catholic website Crux quoted a man as accusing him of abuse in New York's St Patrick's Cathedral when he was a 16-year-old in the 1970s. Other cardinals caught up in scandal include Australia's top Catholic George Pell, number three in the Vatican. Pell faces prosecution in Australia for historical child sexual offences.

Pell and Chilean Cardinal Francisco Javier Errazuriz were both removed from the so-called C9 Council of Cardinals, an international advice body set up by Francis himself, the Vatican said in December.

Despite being removed from the C9, Pell, 77, remains in charge of Vatican finances, the third most powerful position in the Roman Catholic Church. He has pleaded not guilty to the charges.

Defrocking is the most severe ecclesiastical punishment for a priest, who is reduced to the status of a lay person and no longer allowed to lead mass.

Questions nevertheless remain over McCarrick, including how he rose so high within the Church despite suspicions about his behaviour. Retired Italian Archbishop Carlo Maria Vigano has accused Pope Francis of having ignored sexual assault accusations against McCarrick for five years.

Vigano, who is backed by an ultra-conservative US church faction, in August called for the pope to resign over his alleged silence. Francis subsequently promised a fresh investigation into McCarrick, including using Vatican archives.

The pope said at the time that the archives could reveal questionable historic practices, such as the law of silence over abuse among top-ranking clergy that often led to paedophile priests being transferred to other dioceses rather than handed over to face justice.

Vigano alleged that former popes Benedict and John Paul II, who made McCarrick a cardinal in 2001, had taken part in the cover up. McCarrick could yet face civil suits in the US.