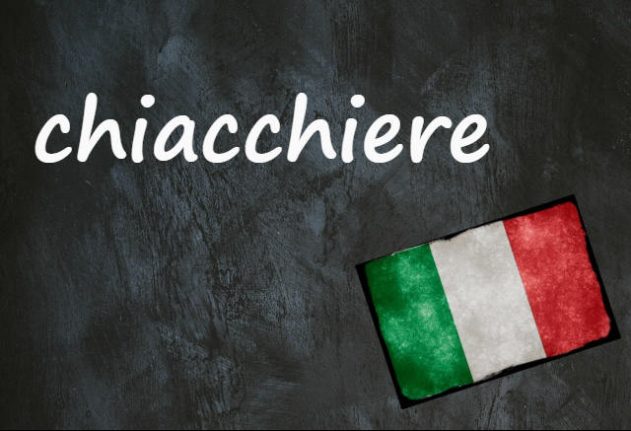 You might know that chiacchiere is the Italian word for a chat, or chatter.

– to have a chat (literally “to have two/four chats”)

Sometimes this word, or the verb chiacchierare (to chat, talk or chatter) can also mean to gossip.

Depending on context, it can also imply what my Italian husband calls “speaking to speak” – meaning idle chit-chat, or useless discussion. Talking about things you'll never actually do, or maybe complaining about problems that you'll never bother to solve.

– to shoot the breeze

Someone who does this a lot might be called a chiacchierone (a chatterbox.)

Either way, it's the kind of word you'll find useful when living among famously talkative Italians.

And the word chiacchiere has another, sweeter meaning.

During February, many towns across Italy are celebrating carnevale. It's not just Venice; though that particular carnevale is in a league of its own, there are plenty of others. Some other towns known for their mardi-gras-like celebrations are Viareggio, Ivrea, Cento, Gambettola, Satriano, and Acireale.

And carnevale is the time to eat chiacchiere; a kind of sweet, fried, sugar-dusted pastry.

Different regions have their own versions and not everyone calls them chiacchiere.

In Tuscany, they're apparently called cenci or donzelle. They're cròstoli in Trentino, bugie in Piemonte, and so on.

But whatever they're called in your favourite part of Italy, chiacchiere are always worth trying during carnival season.